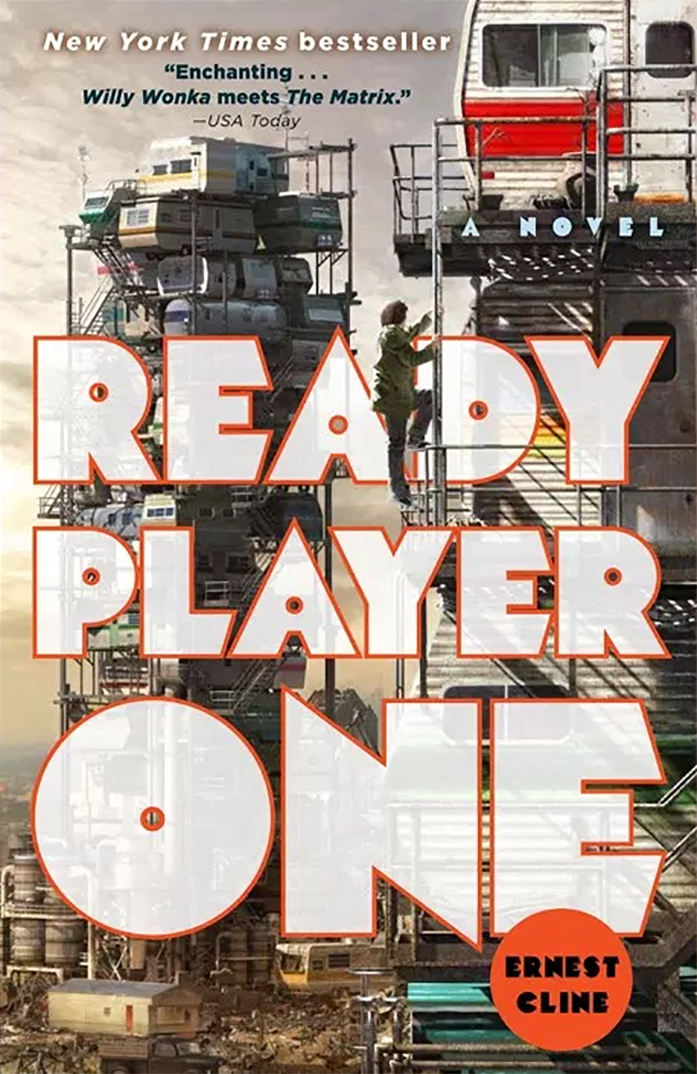 REVIEW: I don’t know how to feel about Ready Player One by Ernest Cline

An incredible concept with an exciting world and memorable characters — but also terribly written.

Ready Player One easily takes the crown for the nerdiest piece of literature I have ever read–ever. This isn’t a bad thing.

Filled with every pop culture reference you could ever think of (both modern and past–but ESPECIALLY past), this is a fun book with engaging characters and an awesome premise.

But something BIG keeps me from calling it great.  Maybe even good.

In the year 2044, reality is an ugly place. The only time teenage Wade Watts really feels alive is when he’s jacked into the virtual utopia known as the OASIS. Wade’s devoted his life to studying the puzzles hidden within this world’s digital confines—puzzles that are based on their creator’s obsession with the pop culture of decades past and that promise massive power and fortune to whoever can unlock them.

But when Wade stumbles upon the first clue, he finds himself beset by players willing to kill to take this ultimate prize. The race is on, and if Wade’s going to survive, he’ll have to win—and confront the real world he’s always been so desperate to escape.

Basically, Earth is in a dying state and everyone’s turned to this virtual reality called the OASIS to escape the horrors of the real world. The OASIS is pretty much the Internet on steroids. This is easily the most intriguing concept of this book. The idea is that you create your own avatar and live whatever life you want. There’s real currency inside the OASIS that you actually work for. People have jobs inside the OASIS. People spend their lives inside the OASIS.

One of the coolest things about the OASIS? All of your favorite franchises are there. Want to be a Jedi Knight? Just go to the Star Wars sector. Want to live in Middle Earth?  There’s a sector for that. Want to play Quidditch? The schools in the OASIS (yes, people go to school in the OASIS) have Quidditch teams. Not to mention the awesome hardware that completely immerses you inside the OASIS (think of virtual reality rooms) make it all real. Or, at least, very close to real.

The story follows Wade Watts who pretty much lives inside the OASIS. He’s devoted his life to solving puzzles (easter eggs) that the OASIS’s creator left behind. But we’re not talking about just any easter eggs. The entire world is looking for the greatest easter egg of all. The person who finds it will inherit the fortune of the man who created the OASIS.

Translation: YOU WANT TO SOLVE CRAZY PUZZLES TO WIN LOTS OF MONEYZ.

You follow Wade throughout the adventure, solving super nerdy 80’s-themed puzzles. There’s lots of danger and action and geekery things to be had in this story.

So let’s talk about the GOOD.

The story’s premise is great. The first chapter, which sets it all up, will suck you in. The idea of the OASIS is exciting and appealing.

The world: TOO COOL. I explained the OASIS earlier. It’s just awesome. And Cline does a fantastic job at building the culture of the world. Although, this does lead to some problems (See below).

The characters: AWESOME. You grow to love them. If I could pick one word to describe them? FUN.

All of that stuff makes a great story, right?  So why am I on the fence about this one?

The bad isn’t in the concept, story, characters or even themes. The problem is in the actual writing. The writing itself is torture, and there are two main reasons for that: INFO DUMPING and TELLING vs SHOWING.

Let’s start with the info dumping. All of the clues to solve the puzzles are based on 80’s trivia. Unless you grew up in the 80’s, chances are that you’ve never heard of a lot of the TV shows, video games, books and even some of the movies that are referenced. And even if you have heard of them, you don’t know them as well as the main characters do. But the details surrounding these franchises are vital to the story. So in order for you to understand, Cline has to take a lot of time to give you the background information behind these franchises.

A LOT of background information.

There are huge blocks of info dumping in this novel. Each one is like hitting a brick wall. Honestly, I love the 80’s culture in the OASIS, but I do not need to know about every little detail behind Dungeons and Dragons. Just tell me what’s vital — and do it quickly.

All of the info dumping made it hard for me to finish this book. Like I said, I recognize the importance of having to know a lot of that information, but sometimes it was just too much.

The second thing has everything to do with that old phrase, “Show don’t tell.” Ernest Cline loves to tell. He really loves to tell. This slows down the pacing and rhythm of the writing. It was almost too much to handle.

This is one of the worst books I’ve read when it comes to telling. One example that really bothered me was that Cline would occasionally summarize dialogue between characters. I agree that we don’t have to know every little word they exchange, but sometimes it was important stuff. Sometimes it was the back story of a main character!  I would have liked to hear how so-and-so got kicked out of their house straight from their mouth. I don’t want Wade summarizing it for me.

I honestly wouldn’t mention these things, but they weren’t just little hiccups that came up every once in a while.  These were huge disruptions from start to finish, and it really made this book difficult to complete.

So where does that leave me in the end? I give this book a C+

I want to give it a higher rating, I really do. I feel like I’ve betrayed the characters and the world by giving it such a low rating. I loved both of them. But I had a hard time finishing this because the writing was just bad.

There will still be plenty of people who love this. I know it’s gotten some great reviews. I understand why. I agree with most of the praise this book gets. If Ready Player One ever becomes a movie, I’ll be there opening night. But to say that reading this book was an absolutely pleasant experience wouldn’t be the truth.

Wonderful plot, characters and message — but the author’s poor writing made the prose clunky and difficult to finish.