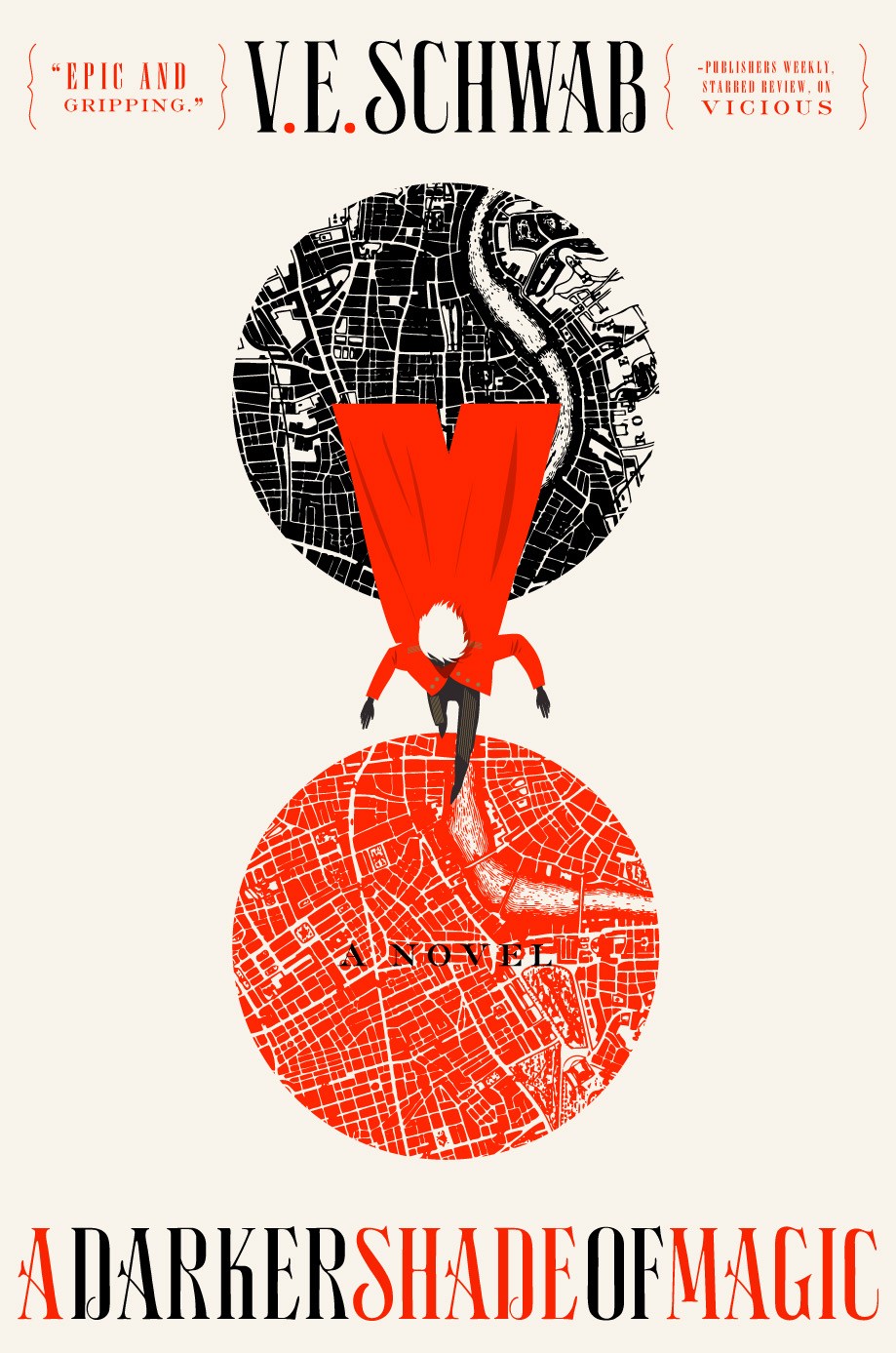 'A Darker Shade of Magic' by V.E. Schwab (Tor Books)

REVIEW: ‘A Darker Shade Of Magic’ by V.E Schwab

From the very first page to the very last word, ‘A Darker Shade Of Magic’ by V.E Schwab (pseudonym of Victoria Schwab) captures the imagination of readers in a gripping tale of adventure, world travel, multiple Londons, and a fabulous magical coat. From the Publisher: Kell is one of the last Travellers—rare magicians who choose […]

From the very first page to the very last word, ‘A Darker Shade Of Magic’ by V.E Schwab (pseudonym of Victoria Schwab) captures the imagination of readers in a gripping tale of adventure, world travel, multiple Londons, and a fabulous magical coat.

Kell is one of the last Travellers—rare magicians who choose a parallel universe to visit.

Grey London is dirty, boring, lacks magic, ruled by mad King George. Red London is where life and magic are revered, and the Maresh Dynasty presides over a flourishing empire. White London is ruled by whoever has murdered their way to the throne. People fight to control magic, and the magic fights back, draining the city to its very bones. Once there was Black London – but no one speaks of that now.

Officially, Kell is the Red Traveler, personal ambassador and adopted Prince of Red London, carrying the monthly correspondences between royals of each London. Unofficially, Kell smuggles for those willing to pay for even a glimpse of a world they’ll never see. This dangerous hobby sets him up for accidental treason. Fleeing into Grey London, Kell runs afoul of Delilah Bard, a cut-purse with lofty aspirations. She robs him, saves him from a dangerous enemy, then forces him to another world for her ‘proper adventure’.

But perilous magic is afoot, and treachery lurks at every turn. To save all of the worlds, Kell and Lila will first need to stay alive — trickier than they hoped.

‘A Darker Shade Of Magic’ follows the adventures of Kell; who has the ability to travel through magical doors to visit four very different versions of London. There’s Red London, which flourishes with life and magic; Grey London, which has no magic but one very mad King; White London, where people fight to control magic and the magic fights back; and Black London, where a magical apocalypse has destroyed society.

Published this year, ‘A Darker Shade Of Magic’ is the first in a planned trilogy with the second book to be released in 2016. Being the first book in a fantasy trilogy, you would expect some major world building. This is the case, however, Schwab’s world building is hidden beneath beautifully written passages and snarky banter. The extensive work that would have been required to develop four believable versions of London and a carefully structured system of magic really did pay off in the end. The attention to detail Schwab has paid to the plot and world building really does make this book spectacular in its own unique way.

Similar to the plot, Schwab’s writing style is extensively developed and adapt to suit the story. Being my first V.E Schwab (Victoria Schwab) read, I am not familiar with her writing style outside of ‘A Darker Shade Of Magic’, but I am excited to read more of her work to compare and contrast the writing between her novels.

The characters that populate the four Londons are extremely well developed with character arcs to match. The development of each character is so well thought out and structured it all fits together perfectly. I wouldn’t be suprised if I ran into Kell or Lila whilst out and about. Their personality and character flaws were so believable they felt real.

Overall ‘A Darker Shade Of Magic’ by V.E Schwab is a gripping tale of adventure, misadventure, haps and mishaps that keeps you enthralled from beginning to end. If you have any interest in fantasy, or simply like London, I urge you to pick up this book. It is a new favourite.