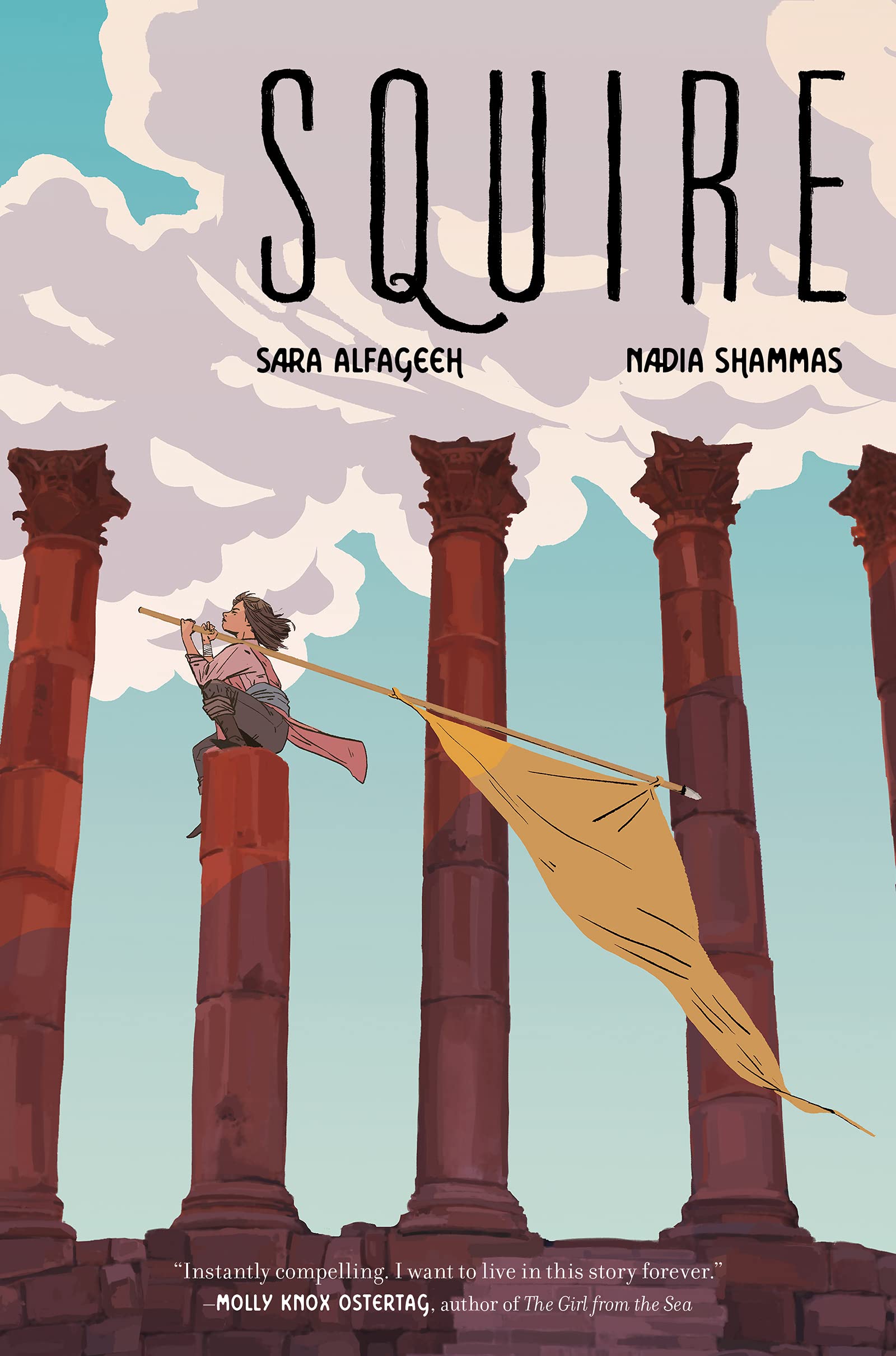 Review: ‘Squire’ by Sara Alfageeh and Nadia Shammas is stunning on every level

If it’s not already on your TBR, it should be.

Beautifully written and illustrated, Squire is an ambitious tale with an equally ambitious protagonist to match. The result? A story that’s both hopeful and inspiring. Readers aren’t going to want to sleep on this one.

Aiza has always dreamt of becoming a Knight. It’s the highest military honor in the once-great Bayt-Sajji Empire, and as a member of the subjugated Ornu people, Knighthood is her only path to full citizenship. Ravaged by famine and mounting tensions, Bayt-Sajji finds itself on the brink of war once again, so Aiza can finally enlist in the competitive Squire training program.

It’s not how she imagined it, though. Aiza must navigate new friendships, rivalries, and rigorous training under the unyielding General Hende, all while hiding her Ornu background. As the pressure mounts, Aiza realizes that the “greater good” that Bayt-Sajji’s military promises might not include her, and that the recruits might be in greater danger than she ever imagined.

Aiza will have to choose, once and for all: loyalty to her heart and heritage, or loyalty to the Empire.

Aiza is stuck in life. She’s a member of the Ornu people, garnering ridicule and distrust from others. That doesn’t make it easy for Aiza to tap into her ambitions. Her luck changes when she learns that the Bayt-Sajji military is searching for recruits. This is her chance to become a squire, setting her on the path to full citizenship.

So much of why Squire works is thanks to Aiza. She brims with excitement and resolve. She’s feisty and yet woefully unprepared for the road ahead of her. That’s not going to stop her. She knows what she wants, and she’s determined to put the work into transforming her desires into reality. You can’t help but root for her. Because of this, Aiza will stay with readers long after turning the page.

A lot also has to be said about Sara Alfageeh’s incredible artwork.

The artwork compliments the writing so well — and this is, again, best seen with Aiza. Her character design emphasizes both her personality and place in the world. She’s small compared to other characters, with thin limbs and a lean physique. Yet her expressions explode with emotion. All of this further solidifies her role as an underdog, which makes her victories so much sweeter.

And Alfageeh’s talent extends far beyond Aiza’s character design. Readers are introduced to a dynamic world, one that can be dark and somber and other times vibrant and breathtaking. In a note at the end of the book, Alfageeh mentions that coloring Squire “was one of the hardest creative problems I have faced as an artist.” Well, that hard work has paid off in what is likely to be one of the most beautifully-packaged books of the year.

There are pages where the color splashes across panels — bright oranges, soothing blues, pink skies with cream-colored clouds. Each page drips with emotion, from the characters’ movements to the glimpses of the vast Bayt-Sajji landscape, much of it inspired by the Middle East.

There’s reason to revisit Squire for the artwork alone.

Worldbuilding is where the book loses its footing in some places, though not enough to knock the story on its back. You can tell a lot of thought has been placed into this world. It’s living and breathing, what you would want in a fantasy novel. But it at times feels constrained by the pacing. There are places where concepts could be fleshed out and explored, but they often get swept under the rug as the plot moves forward. Again, not a dealbreaker. And you have to understand that there’s a lot to unravel in this graphic novel, which checks in at more than 300 pages.

As wonderful as Aiza and the artwork are, Squire‘s greatest strength is found in the messages it wants to convey. Unfortunately, I can’t dive deep into this topic without spoiling parts of the story. All I’ll say is that Shammas and Alfageeh have done a masterful job at highlighting the importance of embracing identity and fighting against political tyranny. Readers will have a lot to unpack on this front.

Alfageeh and Shammas have illustrated and penned one of the most memorable books of the year. The emotion. The action. The themes. The art.

Squire is stunning on every level.

Squire will be released on March 8.