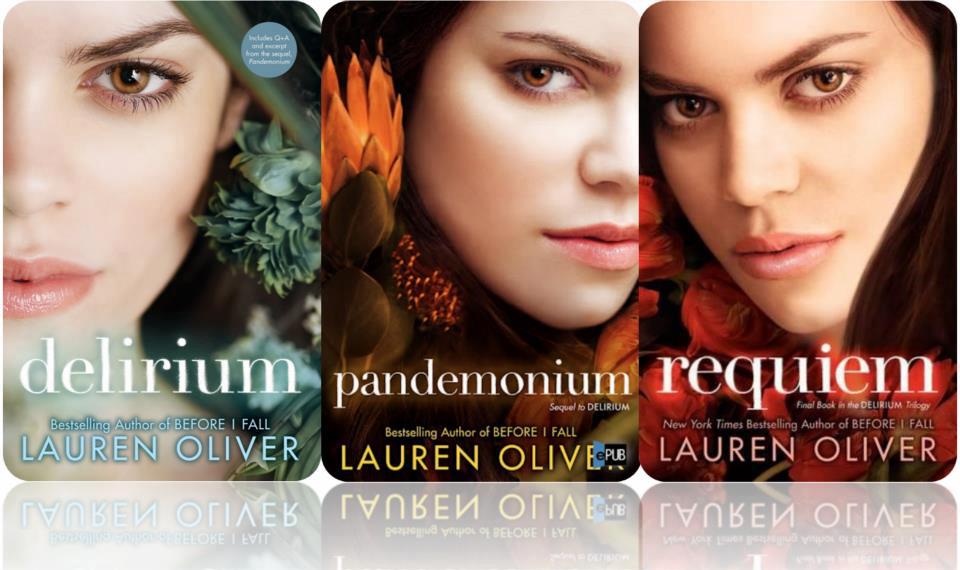 You’ll be hooked from the beginning.

For me, a book has to have romance in it to pick my interest.  Whether dystopia, action, etc., I always need romance.  So The Delirium Trilogy by Lauren Oliver was right up my alley. It’s all about, love! Or the deliria, as they called it. I was hooked from the beginning.

Ninety-five days, and then I’ll be safe. I wonder whether the procedure will hurt. I want to get it over with. It’s hard to be patient. It’s hard not to be afraid while I’m still uncured, though so far the deliria hasn’t touched me yet. Still, I worry. They say that in the old days, love drove people to madness. The deadliest of all deadly things: It kills you both when you have it and when you don’t.

Lena Haloway is our heroine, she lives with her aunt Carol, uncle William and cousins Jenny and Gracie.  She’s ready for the cure–the cure that rids people of love–and she has been all her life.  But, as it always happens, life surprises her and changes everything that she’s always believed in.  She meets a boy, Alex Sheathes.  Together they will start a forbidden romance and begin to question the entire system they’ve grown up in.

I’ll try not go to much into details.

First of all, this is a dystopian world.  The United States is surrounded by an electric fence.  No one goes out to the world and no one comes it.  Why? Because the rest of the  world is not cured.  They are deliria infected–in other words, they’re prone to love. There’s a world outside the fence within the United States, it’s called the woods, and people born there are invalids.  In the United States at the age of 18, people are forced to have the cure.  The cure is a procedure that it takes away your emotions,and feelings.  There’s no love nor hate, thus meaning that there’s no conflict or war.

One particular day, Lena meets the security guard Alex Sheates, who is actually an invalid.   From then on, Lena and Alex become inseparable, they fall in love, see each other secretly, and make plans to escape together into the woods.  However, their plan goes amiss and only Lena escapes.

In Pandemonium, the second book in the trilogy, you get to see Lena grow up and mature. There’s something different about her. She’s strong.  Lena is out in the woods with a new family, now surrounded by a world she’s never known.  The aftermath of the first book leaves Lena thinking that Alex has died, which clears room for a new love interest (UGH!). Enter Julian, the son of the DFA (Deliria Free America) founder.  You can imagine how this complicates things.

Then, finally, there’s Requiem.  Sigh! This book has two points of view: Lena and Hana–Lena’s friend.  Lena is a full member of the resistance, she’s fighting for freedom.  Hana, on the other side of the fence, is still living in Portland, about to be married to Fred Hargrove, the mayor of  Portland.  Several mysterious are solved (such as the one surrounding Lena’s mom) and we see Hana turn over a new leaf as she realizes that the cure didn’t work for her.  My thoughts on this? It’s frustrating. Even with some of the arcs coming to a close, this book doesn’t tell you enough!  You know what is happening to Lena and Hana, but a lot of the other arcs seem to be ignored.

Oliver’s strength is in making you feel what Lena is feeling–you become her (at least in Delirium).  Unfortunately, the quality lessens as the series progresses.  This trilogy started great but by the end of Requiem, I was completely lost.

It felt like the characters were not really defined and the plot just was messy.  You don’t get a proper ending.  Oliver just leaves too many loose ends.  I was ranting, like… “What kind of ending is this? What just happened? All I know is that the fence in Portland is down!”  The biggest let down is the unresolved plot-line between Lena, Alex, and Julian.  I think there should be another book, where Lauren tells us, who Lena choses, and what happens with the rest of the country.

There are 4 short stories, Hana, Alex, Raven and Annabel.  These help you to understand a little bit more of what’s going on, but it’s still not enough.

Overall, it’s a good trilogy if you like stories without endings.  I saw an interview where Oliver says she wrote that ending because she wanted readers to decide what happens next, but I still felt disappointed in the end.

Delirium was adapted as a television show. Watch the pilot episode here!

Romantic story. Not a very good ending. Needs another book.