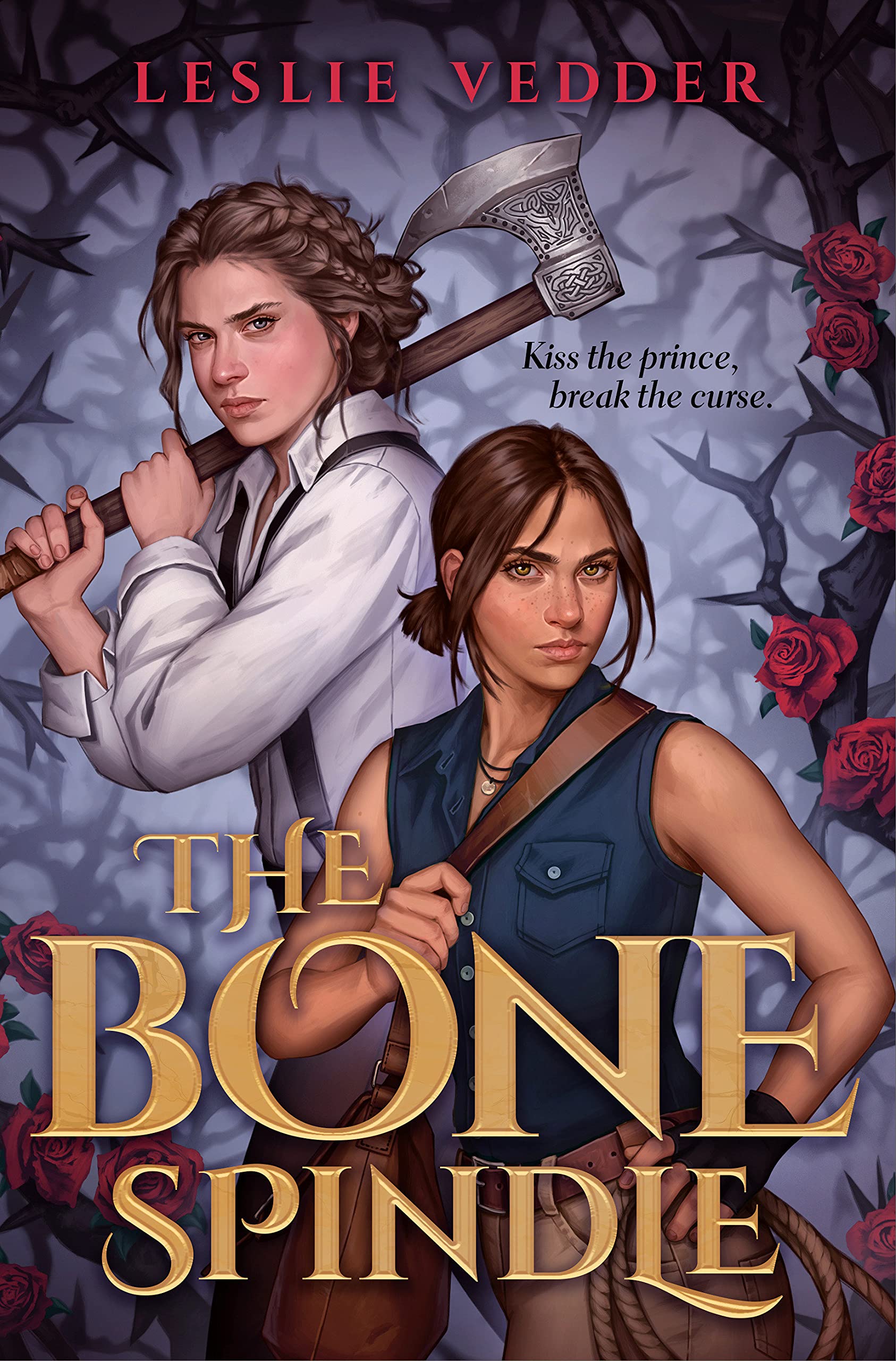 REVIEW: ‘The Bone Spindle’ by Leslie Vedder turns a classic fairytale on its head

No matter how you might resist, you will fall in love with this brilliant retelling of ‘Sleeping Beauty’

When someone says “fairytale retelling” I immediately jump at the chance to read it, and The Bone Spindle is an excellent choice.

Filore, a treasure hunter with a knack for riddles, is busy running from her own deadly curse, when she pricks her finger on a spindle. Bound to the sleeping prince Briar Rose with the spindle’s magic — and chosen as the only person who can wake him — Fi is stuck with the prince’s ghost until she can break his ancient curse and save his kingdom.

She’s going to need a partner. A warrior huntswoman with an axe to grind (literally), Shane couldn’t care less about curses and ancient texts. But instead of riches, the two girls find trouble.

Dark magic, witch hunters, nightmarish beasts — and of course, curses — all stand in their way as Fi and Shane undertake the dangerous journey into a forgotten kingdom where the sleeping prince’s body waits.

Leslie Vedder clearly doesn’t do things by halves. The Bone Spindle takes the premise of Sleeping Beauty and turns it completely on its head, with the damsel saving the prince with her LGBTQ+ warrior princess partner by her side.

The Bone Spindle is written from three points of view, but primarily Fi’s and Shane’s. Fi is clever, decidedly independent and, oh yes, cursed. After a painful experience with her ex-partner and ex-boyfriend, Fi is searching for the answer to a terrible cursed that has been placed on her, and on the journey ends up part of Briar Rose’s salvation. Throughout the book, Fi struggles with her curse-doomed independence (read: loneliness) as she realises she is the only hope for the kingdom of Andar and its sleeping residents.

Shane is lonely in another way. After running from her birth-right, she finds herself becoming a thug-for-hire, but that isn’t the life she dreamed of. Teaming up with Fi was meant to be a one-time thing to make them both rich in treasure and knowledge, but when Fi pricks her finger it is only a matter of time before Shane realises their partnership is far from over.

Fi and Shane’s relationship is full of sarcastic comments, thinly-veiled insults and a blossoming care for each other. They’re not each other’s type — Shane makes that very clear — but their friendship slowly, but surely, develops into a deep-rooted bond where both girls begin to feel a little less alone.

Both of them feel very much like the main character, despite the plot revolving around Fi’s quest to save Prince Briar Rose. Shane meets Red, a mysterious, beautiful woman along the way, whom she feels destined to be with. As Red continues to appear throughout their journey, we get to learn more about Shane’s history, and root for her finding love. At the same time, Fi is frequently visited by Briar Rose’s spirit form, who is determined to get her to fall in love with him — a moment he has been dreaming of, literally, for one hundred years. I loved this twist to the tale: the hopeless romantic prince trying to charm the pragmatic female rescuer (because boys want to be rescued, too).

The plot itself, whilst following the general direction of Sleeping Beauty, is full of action, whether through a battle with giant spiders, fights with witch hunters, or parties thrown by awful exes. Vedder throws in little hints towards other fairy tales, as well as the Sleeping Beauty story we know and love, with Briar’s ancestor named Aurora Rose. It is easy to be taken along for the ride, and I genuinely struggled to put the book down. I was desperate to see where the girls went next, and to learn more about each of their pasts.

As the first in a duology, The Bone Spindle sets a leisurely yet exciting pace. Time is given to build a world of beautiful detail, and rich histories for all of our characters. It doesn’t rush anything, and that is magical in itself. I felt drawn into the world and could picture it vividly in my mind’s eye. And when the end of the book crept up on me…I realised there is so much more story to look forward to in book two.

You will leave The Bone Spindle rooting for everyone, hoping they each overcome their insecurities and seek the help in each other they truly need. It is a truly brilliant read, and a wonderful retelling.

The Bookstacked team were lucky enough to interview Leslie Vedder about The Bone Spindle, so keep an eye (and an ear) out over on Bookmarked for that interview, coming soon!

A bunch of roses

Plot: action-packed enough to capture your attention but leisurely enough to be filled with detail.

Characters: fun and with rich histories — but I would have liked a little more diversity in terms of PoC characters.

Theme/Message: I’m a sucker for retellings, so yes, another success!