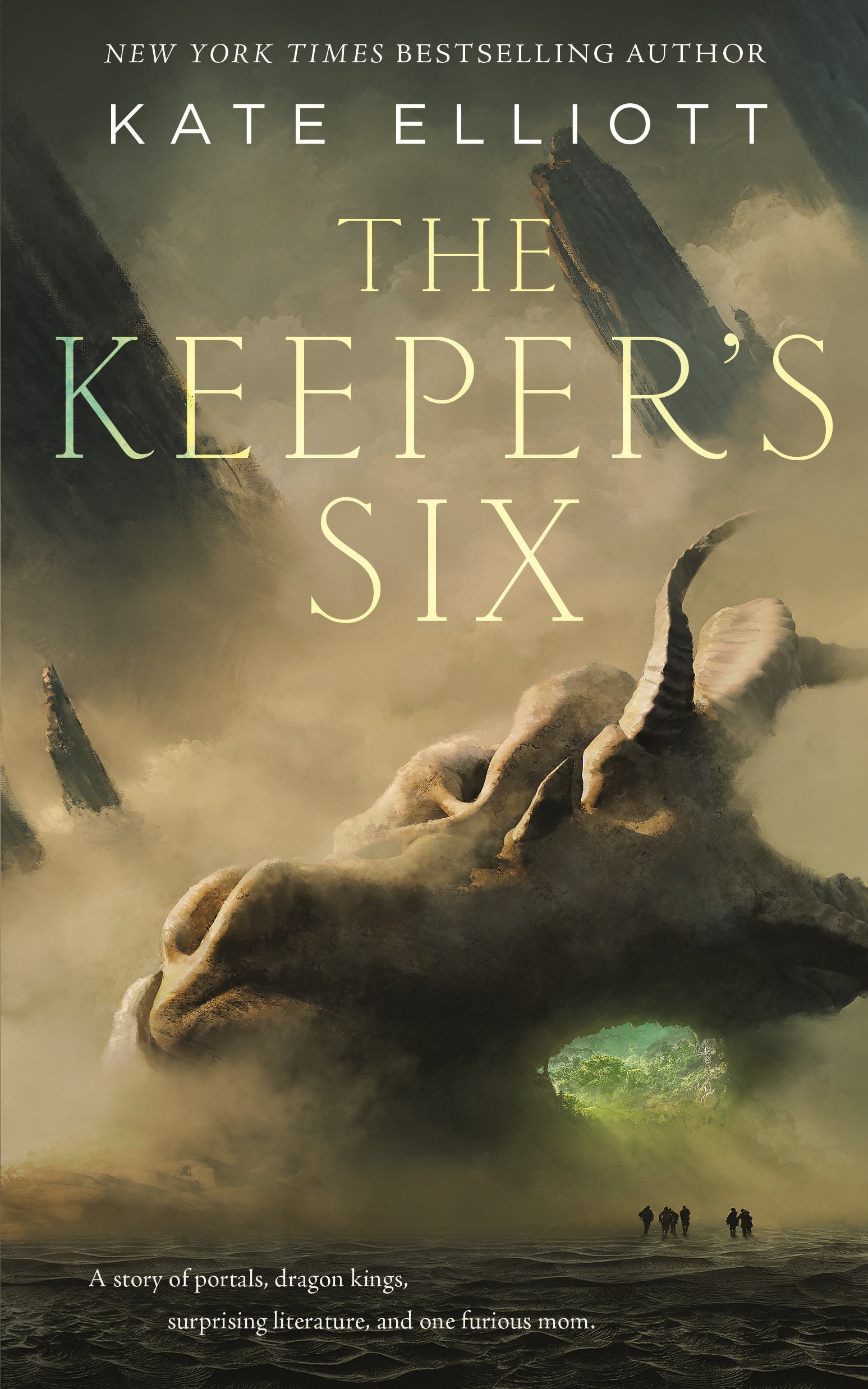 REVIEW: ‘The Keeper’s Six’ by Kate Elliot packs a punch

The past finally catches up to Esther and her Hex when her son is kidnapped.

When Esther sets off to rescue her son, she stumbles onto a larger conspiracy that will impact her and her family’s future in The Keeper’s Six by Kate Elliot.

There are terrors that dwell in the space between worlds.

It’s been a year since Esther set foot in the Beyond, the alien landscape stretching between worlds, crossing boundaries of space and time. She and her magical travelling party, her Hex, haven’t spoken since the Concilium banned them from the Beyond. But when she wakes in the middle of the night to her son’s cry for help, the members of her Hex are the only ones she can trust to help her bring him back from wherever he has been taken.

Esther will have to risk everything to find him. Undercover and hidden from the Concilium, she and her Hex will be tested by dragon lords, a darkness so dense it can suffocate, and the bones of an old crime come back to haunt her.

Despite The Keeper’s Six‘s short length, it is teeming with interesting characters that give us a glimpse into the vast world Kate Elliot created. Each member of the Hex has a distinct personality: Esther is a bit of a philosopher, Faye very much embodies the identity of being the group’s Shotgun, Gus is a man of few but very supportive words, Lydia is a mysterious ancient witch, and Marianne is snarky with remarks that cut deep. I found her relationship with Esther to be particularly intriguing given Esther’s betrayal, and I was surprised by how they ended up after the novel’s climax.

The side characters Elliott creates are just as vivid. Daniel is a wonderful man who makes the most out of a bad situation, befriending his jailors and even suggesting better working conditions for them, while Kai is still healing from a deeply traumatic and complex backstory that is exposed to us throughout the novel. Even though Shahin is only in part of the novel, he also stood out as a character with a lot of potential, especially in relation to Esther.

As the book is a scant 200 pages, Elliott does not include big character arcs which I thought made sense, especially combined with the fact that the whole story takes place over six days.

However, this short length does impact the extent of Elliott’s worldbuilding as she creates a vast world that barely has the space to be explored. In The Keeper’s Six, Elliot’s blended fantasy and sci-fi elements left me wanting to know much more about it. From the dragons’ species and abilities to the different Realms and their populations (one of them is populated by sentient trains!), and questions about The Beyond, I could not get enough of it all.

Plot-wise, the story follows a familiar quest arc though there were some surprises along the way. It was well paced and I found myself flipping through it, especially closer to the climax of the story. The ending was fitting, though I would have liked to see it stretched out a little more so as to cement everything that happened.

In The Keeper’s Six by Kate Elliott, the focus is mostly on immersing the readers through vivid descriptions of the worlds the Hex goes through. This much description does take away from the plot somewhat, but it also allows Elliott to explore complex and darker themes such as trafficking of living beings, what happens when Nature fights back, and whether or not saving one group of people actually does damage to the whole of a bad system. These questions are often left open ended, which I didn’t mind as it gives the world and characters even more depth.

The Keeper’s Six is also teeming with representation of all kinds. Elliott differentiates species through pronouns, using them to also explore gender expression in certain characters. Additionally, Esther’s jewish identity is very prominent through the story while Shahin’s Persian background becomes a subplot of its own.

Finally, all of our protagonists are on the older side ranging anywhere between 30 to 62 to ancient immortal magical being. Issues such as bills and family make an appearance, while Esther does bring up various pains related to her older age throughout. I thought this was both refreshing and fun since it’s so rare to have a fantasy protagonist be in their 60s.

To conclude, The Keeper’s Six by Kate Elliott packs a punch in its 200 pages. It tackles themes ranging from family and altruism to trafficking of people and what it takes to heal from that, with a certain grace. I would have loved for the book to be longer in order to fully delve into both the heavier themes as well as the world itself.

A quest that packs a punch