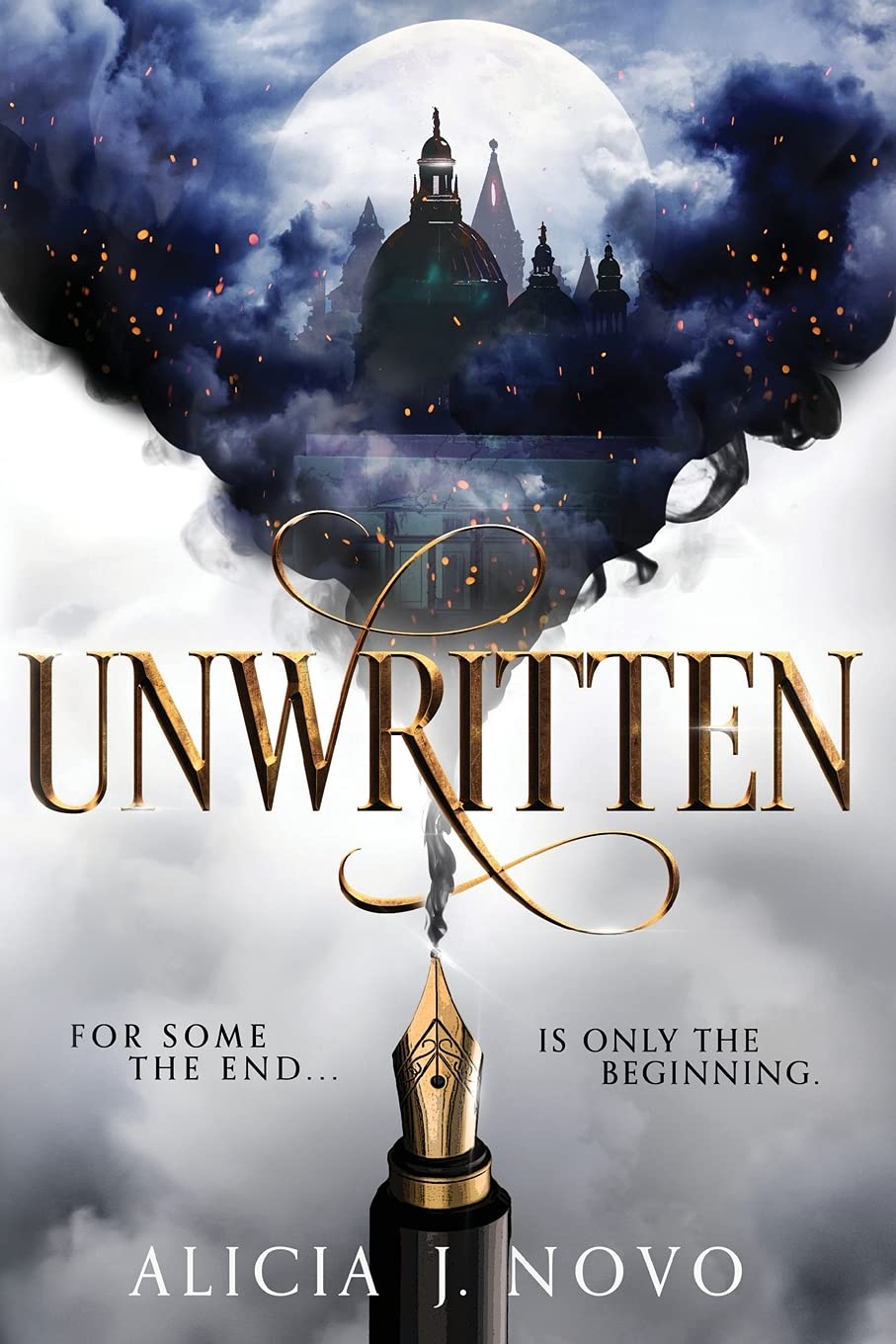 Beatrix must find her story to save herself, and the world.

In Unwritten by Alicia J. Novo, Beatrix takes a leap of faith in the hopes of finding her mom, only to discover how high the stakes really are.

Books whisper to Beatrix Alba. But they aren’t the reason she has never fit in. Bullied at home and school, she keeps a secret — a power of violence and darkness.

When the spell that keeps her hidden fails, she’s catapulted into the Zweeshen, a realm where all tales live, and her dream of meeting her favorite characters comes true. But wishes are tricky, and behind its wonder and whimsy, the Zweeshen is under attack. A character is burning bookworlds in pursuit of a weapon to rule both stories and storytellers. To succeed, he needs a riddle in Beatrix’s keeping.

Now he’s hunting her down.

Joining forces with William, a cursed conjurer, Beatrix must face an enemy who knows her every weakness in a realm where witches play with time, Egyptian gods roam, and Regency heroines lead covert operations. And with her darkness as the only weapon, she may have to sacrifice everything to save a world that rejects her.

When Beatrix chooses to leave Earth behind on the possibility of reuniting with her mother, she doesn’t expect to find herself at the centre of an age old divide that threatens Zweeshen with another civil war.

Novo builds a world where characters live beyond their stories. While this magical world contains as many destinations as there are books, most of the action takes place in a heavily bureaucratic city. Zweeshen was not what I expected. Instead of a world where Beatrix magically fits in, she is an outsider again where most openly dislike or even hate her. Alicia J. Novo delves into the consequences of this xenophobia without holding back. Beatrix faces hatred, multiple attacks, and a government that’s out to get her from day one. This has a profound impact on the story and added complexity to it.

Beatrix is an interesting character. Having grown up in an emotionally abusive home and having been bullied at school, she’s guarded but yearns for acceptance. Novo strikes a delicate balance between the two, making Beatrix a complex and realistic teenager. As for her character arc, I thought that was one of the book’s strongest aspects. The connections she makes on Zweeshen allow her to grow and reflect on her past, as well as see a future for herself.

However, the romantic relationship was underdeveloped. One minute Beatrix dislikes her romantic interest to the point where she doesn’t even want to be in the same room with him, then, within a few chapters she’s falling head over heels for him. Meanwhile, his motivation for staying away crumbles just as quickly despite the danger hanging over their heads. I felt this took away from Beatrix’s character arc, which I otherwise enjoyed.

Another aspect of Unwritten that I didn’t like was how flowery the writing was. Novo embellishes her writing to the point where I was tempted to skim through whole passages. While she paints vivid descriptions that do bring the world to life, she also adds unnecessary descriptors for more mundane actions. This didn’t make the text hard to get through, but it did make some parts feel like they dragged on unnecessarily.

This also has to do with the pacing of the book. While the plot was fun and I enjoyed the various twists, I found the pacing to be uneven. Many chapters end in a cliffhanger and the next starts after a time jump with Beatrix going back to explain what happened during the two. I liked that structure at first, yet the novelty quickly wore off the more it was used. More than once I went back to make sure I hadn’t missed anything only to have Beatrix explain the transition later.

Overall I enjoyed the story of Unwritten by Alicia J. Novo, but found the execution to be lacking. Novo’s strength lies in her characters rather than other aspects of the book and I hope to see that developed more in the sequel.