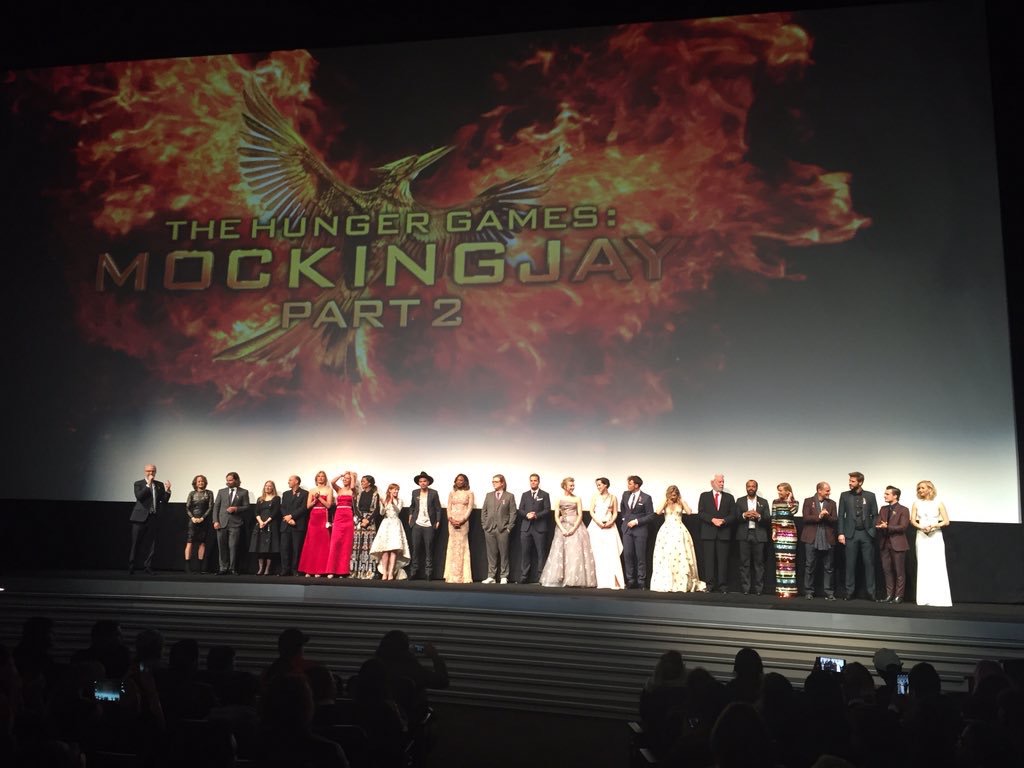 All good things must come to an end and unfortunately for fans, The Hunger Games film series is no exception. Take a look at what happened at the US premiere of Mockingjay Part 1 in Los Angeles, CA on Monday night.

November 16, 2015 was a night to remember. The era of the Mockingjay has reached it’s end.

On Monday night, Los Angeles received the cast, crew and fans at the LA Live complex to bid farewell to one of the most amazing experiences of our generation. However, unlike previous premieres, there were several notable differences. The main difference being the absence of the press interviews. The decision was made by Lionsgate after the terrible attacks that took place in Paris last week.

According to the Lionsgate press release,

“Out of respect for the very recent events in Paris, we have decided to modify our red carpet and we will not conduct interviews at Monday’s ‘Mockingjay 2’ premiere. We will proceed with the rest of the event as planned in honor of the incredible fans who have always supported our films with such passion.”

This decision makes sense since a good portion of filming took place in Paris and most recently, the cast had returned from attending the French premiere of the film just a few days before the attacks. The cast and crew showed their solidarity to the French people and the victims by wearing ribbons bearing the colors of the French flag pinned onto them with a Mockingjay.

The cast braved the windy weather and came out in full swing to greet fans who (like me) waited all day in line just to see them on the red carpet. Every year, the cast never ceases to surprise us at how warm, excited and grateful they are with the diehard fans who came to see them and this year was no exception.

While many of the faces we saw on the red carpet we saw last year at the Mockingjay Part 1 premiere, we also saw some of our old favorite tributes, like Jackie Emerson (Foxface), Amandla Stenberg (Rue) and Alan Ritchson (Gloss). We were also very excited to see Woody Harrelson on the red carpet, who has very rarely been seen at any of the Los Angeles premiere red carpet events since the very first one back in 2012 (and no, he didn’t wear pajamas and yes, he was wearing shoes.) Elizabeth Banks treated us to a behind the scenes District 12 Squad picture on her Instagram with costars, Jennifer, Josh, Liam and Woody. A huge shout out to the Official The Hunger Games Instagram and Twitter accounts for these amazing pictures!

It’s like the saying goes, all good things must come to an end. And this was an epic way to end an equally epic journey.