YA book-to-screen adaptations to read and watch in 2022 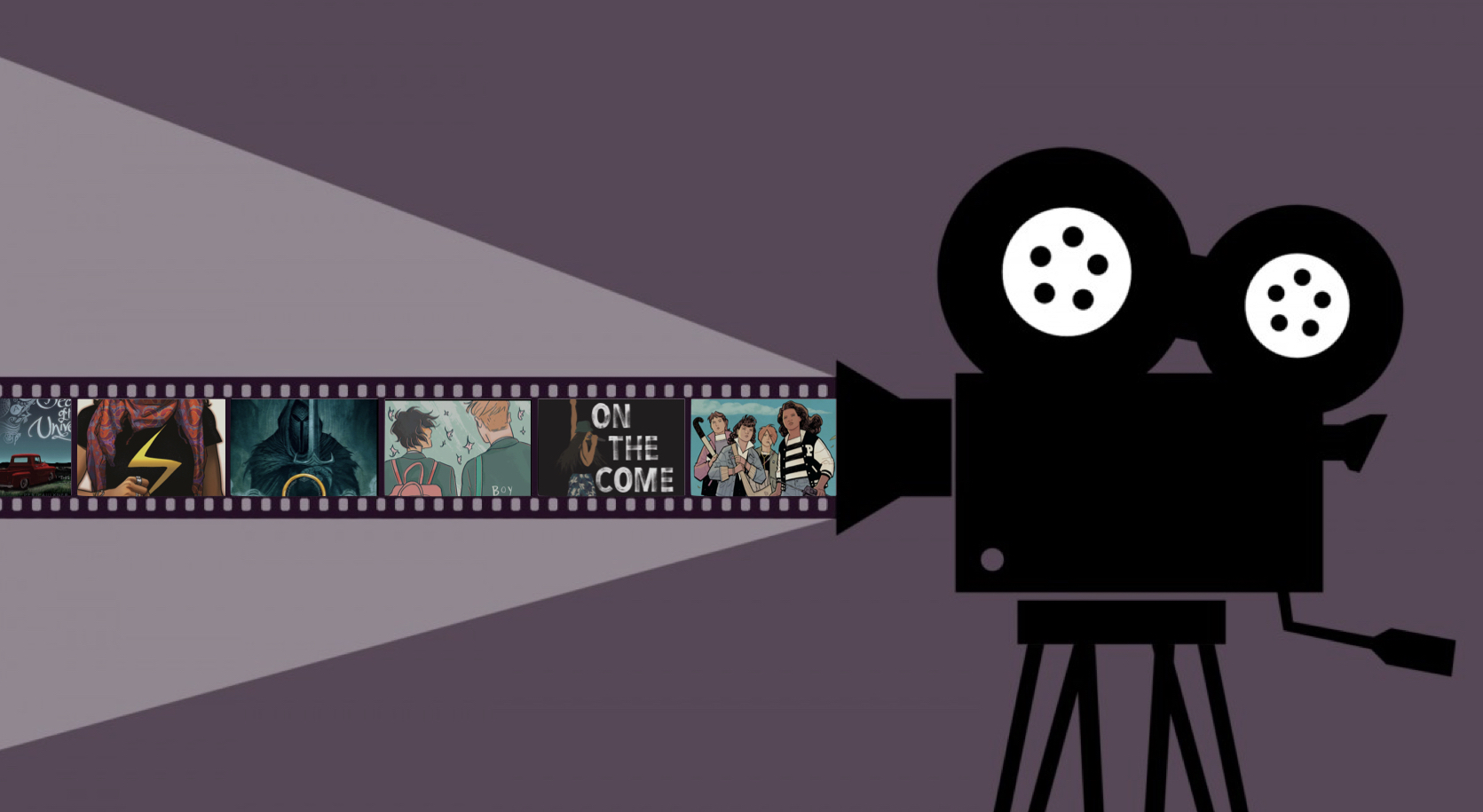 Do you read the book before you watch the movie?

It’s January 2022 and I am stuck in my apartment as the Omicron variant surges through my city. Did I think 2022 would be the year we would finally escape these waves of Coronavirus? Readers, I really did. Searching for some escapism, I’ve returned to binge-watching whatever I can find on any streaming platform I can access.

To pull me out of this New Years’ funk, I’m looking ahead to this year’s upcoming film and television adaptations of YA books and comics, including where to start reading if you want to be all caught up before watching. There is A LOT to look forward to this year!

A slight disclaimer: I can’t promise you all of these shows and movies will actually release in 2022. If I’ve learned anything over the last few years it’s to expect some delays and disappointment.

Superhero shows are currently all the rage and I’m excited for Naomi to continue the trend of awesome teen heroes! The series is produced by the extraordinary Ava DuVernay and is based on the original series from comics legend Brian Michael Bendis. With such big names behind the project, I trust them to put on a great show! The series will premiere on The CW on January 11th.

Where to start: Issues #1-6 of the comic series are available in a single collection, look for Naomi: Season One from DC Comics.

Are You There God? It’s Me, Margaret.

Whether or not this book is technically considered YA, it is inarguably a classic and finally getting the adaptation it deserves. Blume’s writing has long been celebrated as equal parts poignant and humorous as she explores the ups and downs of adolescence. You may recognize Abby Ryder Fortson (Ant-Man’s daughter in the MCU) starring in her first leading role! Lionsgate wrapped production of the film in summer 2021 so you can expect an announcement of a release date sometime soon.

Where to start: Are You There God? It’s Me, Margaret by Judy will be easy to find and at any bookstore or library.

On The Come Up

We here at Bookstacked are huge Angie Thomas fans. The bestselling author behind The Hate U Give and Concrete Rose has another one of her books being adapted to film. On The Come up is about Bri, a 16-year-old who wants to become one of the greatest rappers of all time. The film features an all-Black cast and Sanaa Lathan will make her feature directorial debut. Keep checking back at Bookstacked for an official release date. Production has wrapped and we hope to see an official release date soon.

Where to start: Read On The Come Up by Angie Thomas and if you love it make sure to check out her other books too!

Here at Bookstacked, we’ve been excitedly covering the news around Netflix’s production of Heartstopper since it was first announced. This webcomic-turned-graphic novel has developed a huge fan following in recent years and I’m pleased that author Alice Oseman is directly involved with the adaptation. This heart-warming LGBTQ romance will make great comfort viewing when it hits streaming this year (stay tuned for an exact release date).

Where to start: Check out Heartstopper: Volume One now in print and still available on Webtoon.

Kamala Khan, a.k.a Ms. Marvel is one of the newest, the best and the brightest teen superheroes on the scene. Since her introduction in 2014, she has become one of Marvel’s most popular characters and is long overdo to make an appearance in the MCU. There’s still time to read the comics and learn more about the character before she makes her big debut on Disney+ in 2022.

Where to start: Start with the legendary original series in Ms. Marvel Vol. 1: No Normal or jump into the new ongoing series co-written by YA author Samira Ahmed with Ms. Marvel: Beyond the Limit #1.

Aristotle and Dante Discover The Secrets Of The Universe

This is one of those books that the YA community has loved and cherished over the years. Getting a film adaptation feels like a gift to all the fans of the book. This was one of those stories with characters and moments I could picture clearly in my head. I’m eager to see how filmmakers bring these moments to life on screen. Although the film has been labeled as being in “post-production”, there is so no set release date at this time. I’m including it on this list to manifest a 2022 release!

Where to start: I highly recommend reading the novel by Benjamin Sáenz and for bonus points check out the newly released sequel Aristotle and Dante Dive Into The Waters Of The World.

The Lord Of The Rings

Not much to say here, besides the fact that I am already clearing my schedule to watch the “prequel” series along with LOTR fans. After some delays in filming caused by the pandemic, the long-awaited streaming series set in the Second Age of Middle-earth, before the events of The Lord of the Rings novels and films, will release on Amazon Prime in September. The first season will include eight episodes.

Where to start: If you’re feeling ambitious, there’s still time to read the LOTR trilogy between now and September!

Vampires are immortal and so is Vampire Academy, apparently. After the mixed reception of the 2014 feature film, fans were surprised to hear the promise of the series returning to screen, this time as a streaming series on Peacock. The new series is set to finish filming soon and hit the streaming service later in 2022.

Where to start: Still a fun ride, the original book series starts with Vampire Academy by Richelle Mead.

Based on the popular comic series, Paper Girls promises a ‘80s, sci-fi adventure sure to fill the hole in your heart left by Stranger Things. I started reading this series recently and loved the gritty atmosphere and edge-of-seat reading experience. The story follows a misfit team of 12-year-old paper delivery girls as their Halloween night is interrupted by battling time travelers. The adaption could be released by Amazon any time now (firm release dates just aren’t a thing anymore).

Where to start: You can read the first issue online from Image Comics. If you like what you read, the entire epic is now available in one collection, look for Paper Girls: The Complete Story.

Something Is Killing the Children

For fans of horror, monsters and gruesome TV violence, Something Is Killing The Children and you can find out what it is on Netflix in October. This comic book adaptation is set in Archer’s Peak, a small town in Wisconsin where children begin to go missing in the woods. Luckily, the mysterious Erica Slaughter (that’s a normal last name right?) shows up in town promising to kill the monsters responsible. What could go wrong? I’ve started reading the series and am desperate for my library hold to arrive so can find out what happens next!

Where to start: Look for Something Is Killing The Children Vol. 1 by James Tynion IV, available from BOOM! Studios.

More Happy Than Not

Adam Silvera fans will be pleased to know that adaptations are under way for three of his books including More Happy Than Not, They Both Die At The End and What if It’s Us (co-authored with Becky Albertali). My guess is that More Happy Than Not, the HBO Max series currently in production, is most likely to release in 2022. This was Silvera’s first novel and is about 16-year-old Aaron Soto is struggling to find happiness after a family tragedy leaves him reeling.

Where to start: More Happy Than Not is a great introduction to Silvera’s celebrated YA writing.

What YA film or television adaptation are you most looking forward to in 2022? Let us know in the comments!

Podcast: How YA books are inspiring a generation of activists, with New York Times editor Veronica Chambers