Is Harry Potter YA (and what is YA anyway)? 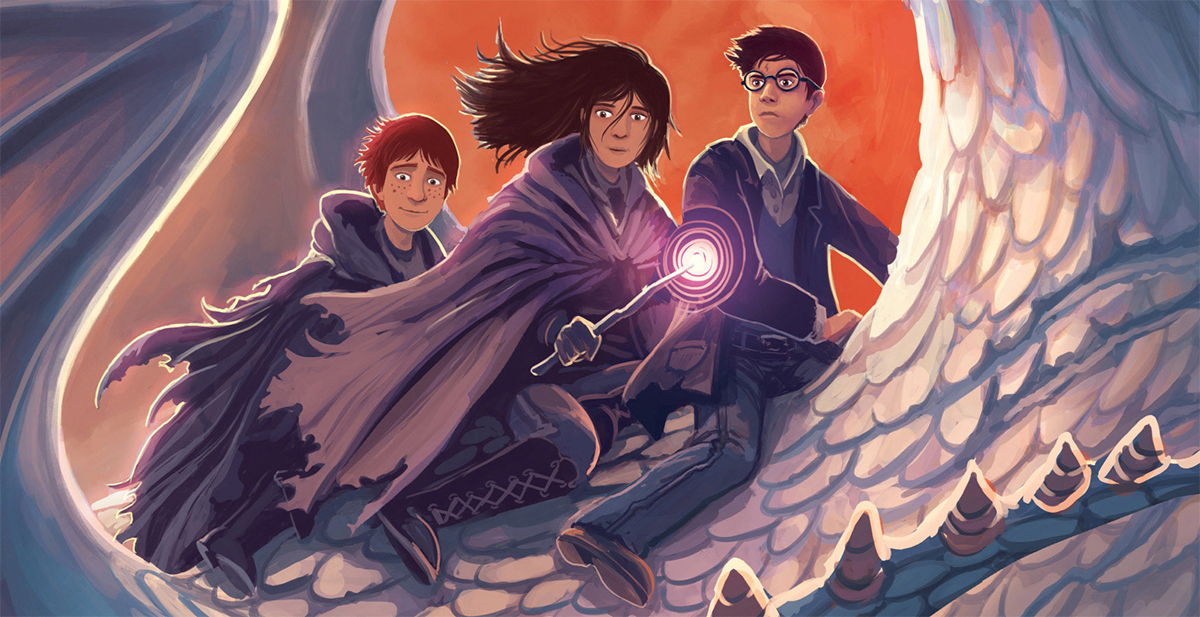 Detail from a paperback copy of 'Harry Potter and the Deathly Hallows', illustrated by Jim Kay. (Scholastic)

The answer is no. But also yes … But no. It’s complicated.

Is Harry Potter YA? J.K. Rowling’s legendary book series is often lumped with young adult lit (we do it here on Bookstacked), but the truth is it doesn’t wholly fit in YA … until it does.

First thing’s first: Go into Barnes & Noble and you’ll find Harry Potter in the Children’s section, snuggled next to Rick Riordan’s Percy Jackson series and down the row from Diary of a Wimpy Kid and Artemis Fowl.

So why do so many consider the Harry Potter books young adult novels? To answer that question, we first have to ask ourselves what YA is. We’re going to have to dive into business-talk to get to the heart of it.

So what is YA?

Books are art, yes. But they’re also product. And a publishing house is a business. And the bookstore you love is a business too.

While readers are approaching books from the viewpoint of art and entertainment, the flip side has to consider how a book will fare as a product. Will the book make money? And how should it be marketed to maximize revenue?

When it comes to book marketing, age categories rule the game. Children’s. Young Adult. Adult. Defining a book’s audience is key to publishing a book as it lets the publisher and bookseller know who to target when marketing a new novel. Much of the book’s identity stems from this. Book design  (including cover and interior), which shelf the book sits on, which authors blurb the book and which press outlets review the book — these are all determined by that category.

But the problem is that many confuse YA as a genre.

Kelly Jensen of Book Riot does a great job at explaining the difference:

A category of books, however, is broader than a mood or a genre. A category is who the book is intended for. It’s part of the marketing of a book, as well as a way for those who work with books to quickly ascertain the reader for whom the book would be most appropriate. Think of the category as an umbrella, with mood and genre falling beneath it. You have adult books as a category, and beneath it, you have mysteries, thrillers, romance, fantasy, and so forth. You can then weave mood among those genres. …

YA classified as a genre also means that books which have no business being called YA are called so. To Kill A Mockingbird is one such culprit, even though the book is narrated by a 9-year-old. Goosebumps? Also not YA. We see it, too, with books that young people often read in middle or high school, again regardless of the actual category the book belongs in.

But YA isn’t a genre. It’s a category.

You should read Jensen’s post in its entirety. It’s a fantastic rundown on YA as a category vs genre.

Still, there are enough people treating YA as a genre that it’s hard to ignore. YA has become a type of story with its own hallmark tropes and elements. YA Romance is heavy on love triangles, but so are YA Dystopian novels. YA Dystopian novels are heavy on revolutions, and so are YA Fantasy novels.

So yes, YA is a category. But it’s also hard to deny that it’s grown into its own … something else. If not a genre, perhaps a movement? Or a mood? Or an idea.

Cover art for Harry Potter and the Deathly Hallows by J.K. Rowling. (Bloomsbury)

Does that make Harry Potter YA?

Again, the Harry Potter books are in the Children’s section. That makes them Children’s books.

The first Potter book, Philosopher’s Stone, is filled with young characters entering a new world, up against ignorant adults and solving puzzles to save the day. With Philosopher’s Stone as the entry point to the Wizarding World, it only makes sense that it would have been shelved with the Children’s books two decades ago.

The problem is that the latter half of the series breaks that mold. It could be argued that Goblet of Fire, Order of the Phoenix, Half-Blood Prince and Deathly Hallows should be marketed to young adults.

The final four Potter books share many of the same elements of YA books. Awkward romance? Yup (cue Harry-Cho flashbacks). Love triangles? A couple: Hermione-Viktor-Ron-Lavender. And don’t forget about the OGs: Lily, James and Snape. The final books are heavily political as well.

You need to understand that Harry Potter is unique from most book series in that the protagonists grow over the course of several years. Rowling broke the mold when she chose to age Harry and his friends.

Barry Cunningham was an editor at Bloomsbury when Rowling was picked up back in the ’90s. Rowling (now somewhat famously) asked her editor and agent, “How do you feel about sequels?” shortly after the first book was picked up. Cunningham later explained in a Biography documentary that he was struck by the fact that she had a detailed plan of each book and knew exactly where the characters were going. Most of all, he was fascinated by the fact that Harry Potter would grow up with each book.

“Children’s book characters don’t grow up in real-time, normally,” he said. “They’re locked in the time they are. And the sequels are endless re-runs of the same kinds of adventures. But to have a character developing in real-time as his age developed was a really interesting idea.”

In that sense, Harry Potter grows into YA.

That said, when looking at YA as a genre or movement or idea or whatever it is, those latter books are decisively YA. They’re clearly not written for 10-year-olds, though a young reader can certainly enjoy them. The final Harry Potter books are operating on a much higher level.

Ultimately, when someone says Harry Potter is YA, you need to realize that they’re more than likely referring to the latter-half of the series. They’re also probably referring to YA as a genre. And even though YA’s not a genre, it’s sort of organically become one — or at least something like a genre.

Regardless of which bookshelf it should sit on, Harry Potter has cast a spell over the world. Young and old readers alike have cherished the books and continue to read them to this day.

At the end of it all, isn’t that what matters most?