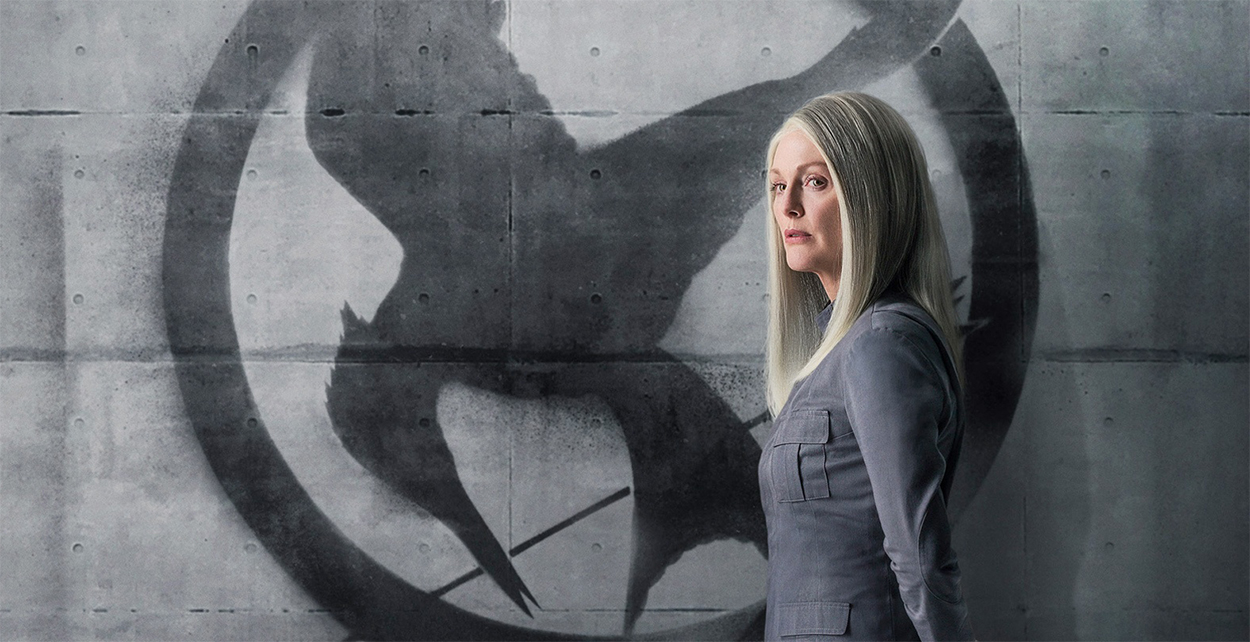 “The bruises of war strip her of the redeeming qualities that she may have once had. In this sense, Coin’s story is a tragedy. She’s a fallen angel, a victim to the manipulations and brutality of violence.”

What makes a killer?

By the time we meet President Alma Coin, we can’t quite put a finger on it, but we’re pretty sure we don’t like her. Or–at least–Katniss doesn’t like her, but seeing as we experience the books through Katniss’s eyes, we come to feel the same way.

Now. For the sake of the conversation let’s recognize that in the movie, Mockingjay, Part 1, Coin actually seems like an all around great leader and individual. She’s unrelentless but caring. When Katniss is distraught over Gale and Peeta at the end of the film, Coin actually goes out of her way to comfort her. Along the way, we learn that Coin had a family who died to disease. This tidbit suggests that she’s capable of love and can relate to sorrow and grief.

This portrait of a strong but loving woman is sharply contrasted with the woman that Katniss perceives at the end of Mockingjay. In fact, President Coin is chillingly similar to President Snow by the time we reach the end of the series. From her likely involvement in the massacre of children, to the support for a new hunger games–we don’t see any signs of compassion and love in her character. What we perceived in her before is gone.

That’s what makes her so interesting.

By all accounts, Snow appears evil from birth. He grew up with evil in his heart (consider his rise to power) and then employed atrocious methods to keep his power. And yet Coin might have grown up as a decent person. She was a mother, a wife–seemingly someone of valor and respect. She was the leader of District 13 and held an honorable goal in her heart.

So how does the light and hope of the rebellion become something so dark and sinister?

What makes a killer?

Among the many themes that author Suzanne Collins teaches us, perhaps the most important is how the tragedies of war can change and shape a person. We see it in Katniss. While always somber and serious, due to the tragedies in her family, Katniss becomes more compassionate, violent, and tormented after competing in the Hunger Games. However, Katniss’s transformation is not like that of Coin’s. Katniss is always compassionate and she doesn’t lose a sense of justice. But Coin does. The bruises of war strip her of the redeeming qualities that she may have once had. In this sense, Coin’s story is a tragedy. She’s a fallen angel, a victim to the manipulations and brutality of violence.

I feel that Coin’s journey serves as a warning. We should look at Coin and recognize that we are also people of good intentions, but that it’s easy to slip along the path and take a darker turn. We should be aware of the ways in which our compassion and love for others can vanish so easily. Yes, Coin and Katniss’s interests were aligned. Let’s not forget that Coin wanted to see the Capitol fall for (let’s assume) the right reasons.

But if anger, hatred, and violence are all that’s left, then what’s the point in the end?