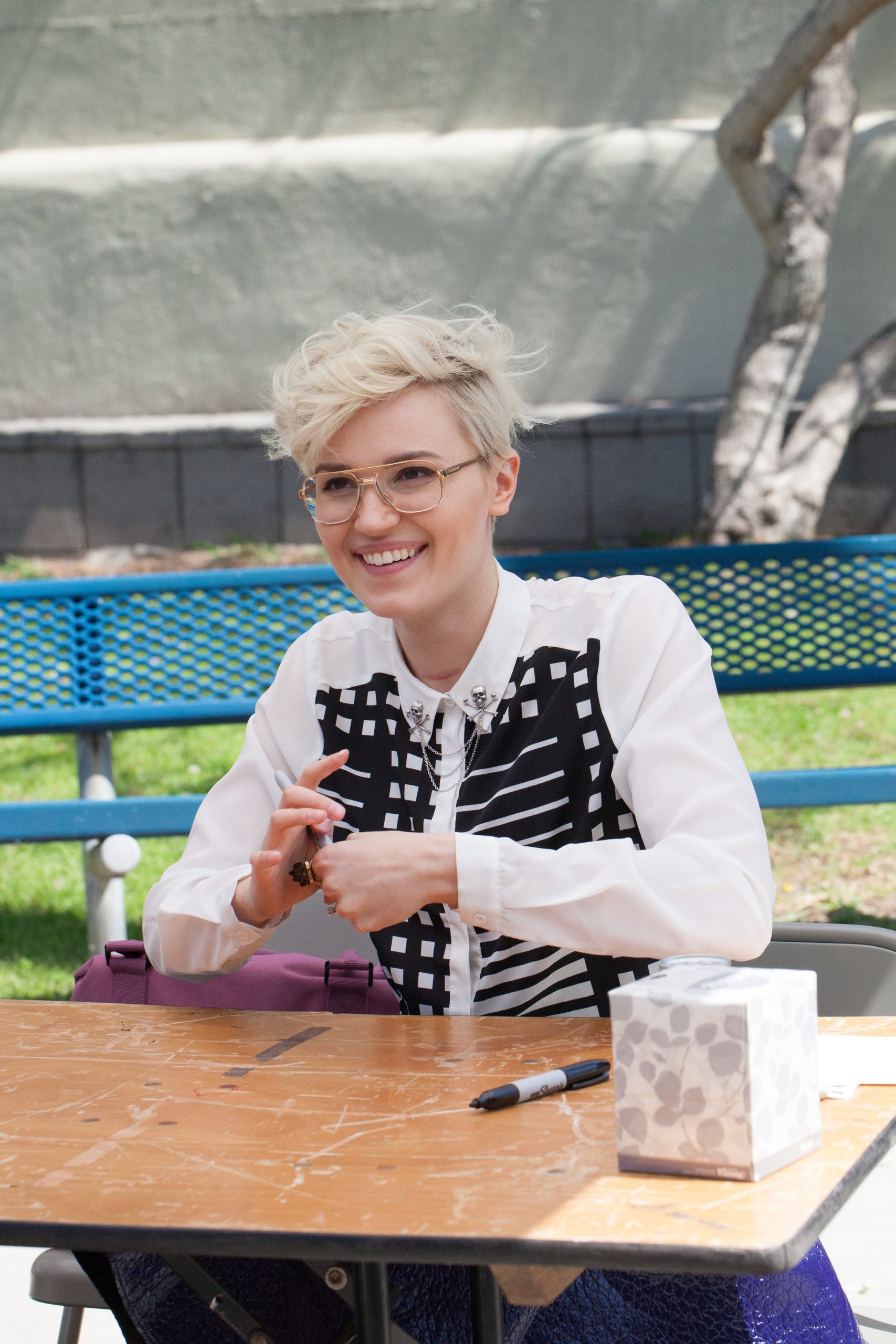 Veronica Roth showed up at the first annual YallWest in Santa Monica this month. And although she was part of several panels during the 2 day festival her Keynote panel, Afternoon Tea with Marie and V was the main attraction. During this one hour long panel, Marie Lu, author of the Legends and The Young Elite series and […]

Veronica Roth showed up at the first annual YallWest in Santa Monica this month. And although she was part of several panels during the 2 day festival her Keynote panel, Afternoon Tea with Marie and V was the main attraction. During this one hour long panel, Marie Lu, author of the Legends and The Young Elite series and Veronica Roth, author of the Divergent series, had a fun, laughter filled conversation where they talked about everything from superheroes and villains, to writing habits, the differences between their books and of course, Veronica’s new untitled books series.

The Afternoon Teanote: Tea with Marie and V

Marie Lu: I like that we were talking about superheroes in general and how your favorite superhero is Batman.

Veronica Roth: Yeah. ‘Cause he’s angsty. I like it. I like the angst. Superman is like “ohh” all American, Kryptonite—Kryptonian. He’s from Krypton, so what’s the deal with that? Why is it kryptonite that hurts him if he’s from Krypton?

On her new upcoming book series

Marie Lu: You’re working on a new series now too? And I’m super excited about it. I mean I only read about it super briefly online but whatever you can say about it.

Veronica Roth: Well, it’s a space opera, so yeah! For those of you who don’t know what a space opera is, it’s sort of large scale sci-fi stories a la Star Wars. And it’s about a young man who teams up with or sorta teams up with someone who is supposed to be his enemy in order to get revenge…on someone, obviously. That’s all I can say, which I realize is very annoying but um I’m like the only one who’s read it so—read the part of it that exists so I don’t want to make any promises that can change—I revise a lot.

Marie Lu: Did you find that your process kind of changed when you were writing your new series?

Veronica Roth: Writing habits! I listen to music too. But I can listen to lyrics. Actually this time, when I was starting to channel a particular voice I would listen to different kinds of music, so uh I needed—I listened to the new Sia album over and over. I have all the words memorized.

Veronica Roth: Yeah, really. I think just over time it’s changed. So Divergent I wrote by the seat of my pants, as they say. No planning, zero, zero planning. In the future, I learned I will plan everything. So because you set some things up and then you have to stay consistent with them or you have to try your very hardest and some of the things I set up were hard to deal with later. Like questions that I had to answer and things that I had to keep intact that I was like, “No! Why?” SO I learned a lot from writing those books and as I went I planned more and more. And with this series, I have like lots of documents. Yeah, like world building encyclopedias-documents. ‘Cause you gotta keep track.

Marie Lu: Especially with a space opera. ‘Cause I imagine there’s so much new things to keep track of.

Veronica Roth: With dystopian books, they have to be based on real life, in a way that other more speculative things—like you have to rely on history and in the way the world is currently set up and you know the systems that are in place and you know we have to imagine how they’ll change realistically over time and that’s like—it was so hard for me it. I didn’t really know what I was getting into when I jumped into the genre. So it’s been really liberating to write about a completely different universe that has completely different rules that have to be internally consistent, it has to makes sense inside of its own logic, otherwise it’s just annoying. But it doesn’t have to be based on—which means it could play with a lot of things.

Veronica Roth: Yeah. There may or may not be lasers involved!

Writing characters who are the opposite of who she is and the appeal of villains.

Veronica Roth: That is interesting though because it’s tough to write from the perspective of a character whose world view you fundamentally disagree with. Like my characters are different from me, but they’re not on this basic like beliefs about our morality level.

Marie Lu: Do you have a favorite villain in books?

Veronica Roth: Aw man! This is tough. I think because we get to see so much of his backstory, I really like Voldemort. He-who-shall-not-be-named. That’s why the 6th book’s my favorite of Harry Potter because you just get to see so much of the family that built him. I really like the idea of the question of do people inherit evil? Do people inherit personality stuff from parents or is formed when they’re young? Or is it formed with both and what combination produces you know people that we know and are afraid of. So this idea of him inheriting these prejudices and then also making choices to further become this terrible person is—I just love the exploration of it really fascinating.

Audience Question: How do you choose character deaths? Is there one that is always going to die?

Veronica Roth: Sometimes you hit a point in the manuscript where I’ve been setting up a character death for 50 pages and I have no idea. Like you reach the point and you’re like “Oh, I know what has to happen here. Oh no.” but with the more major or the more significant the character you know the more screen time they get, the more they were planned, for me, because it has to be for a really good reason. But I have planned several character demises in advance from the very beginning. The ones you are thinking of: yes. Since the first one.

Veronica Roth: Sandy Lemon and Alex London. I mean I don’t wanna start, like maybe people are at the festival. Okay I’ll tell you a story, I share an agent with Leigh Bardugo and so the manuscript of Six of Crows was like in my presence for a brief period and it took all of the strength in my body, not to open—like not to steal it and start reading it. So, I’m really looking forward to that.

Audience Question: At what point did you decide you wanted to be an author?

Veronica Roth: I started writing almost daily when I was 11 and I don’t know why, it’s kind of like a weird hobby to just pick up and do but–um I think my mom was worried about my socialization skills. She was like, “You spend all your time alone on the computer like writing things. What’s going on? Be social.” She was very encouraging, don’t get me wrong, but you know it was a lot of time. It didn’t really occur to me that I would make a career out of it. I just knew that I would keep doing it no matter what, ‘cause I just loved it so much…writing is just a huge joy for me. You know people care about how things do, but it just doesn’t affect their passion for the creative act and that’s how I’ve always felt about writing. It’s like I will keep doing this no matter what happens. So when I was submitting my manuscripts to agents, I was like “Well, you know, someday. Hopefully someone will be interested in what I write. But for now I’m just gonna keep doing it and see what happens.” So I don’t know…I think it was when one of the books sold that I was like, “Oh. It works!” It didn’t occur to me that I would have to prepare for this, which is kind of loony…you hear about people writing 10, 12 manuscripts before anything happens…I was assuming that was going to happen. But it didn’t. I was very fortunate.

Audience Question: Which one quality of which one of your characters do people close to you, knowing you so well, say “Ohhhh?”

Veronica Roth: Okay so Tris is like obsessive in her guilt, so I guess…this is not a fun answer but it’s true. So she puts a lot of pressure on herself to do the right thing at any given time and she’s like constantly cycling going through questions of morality in her head and thinking about she’s done and what she should do and that’s like that’s what I do. It’s kind of like a ruminating quality that a lot of anxious people have.

Ending on a funny note, here is what Veronica said she did on prom night.

Veronica Roth: Instead of going to senior prom with my boyfriend in high school, we were like “You wanna go to prom?” “No.” “Let’s go see Star Wars.”