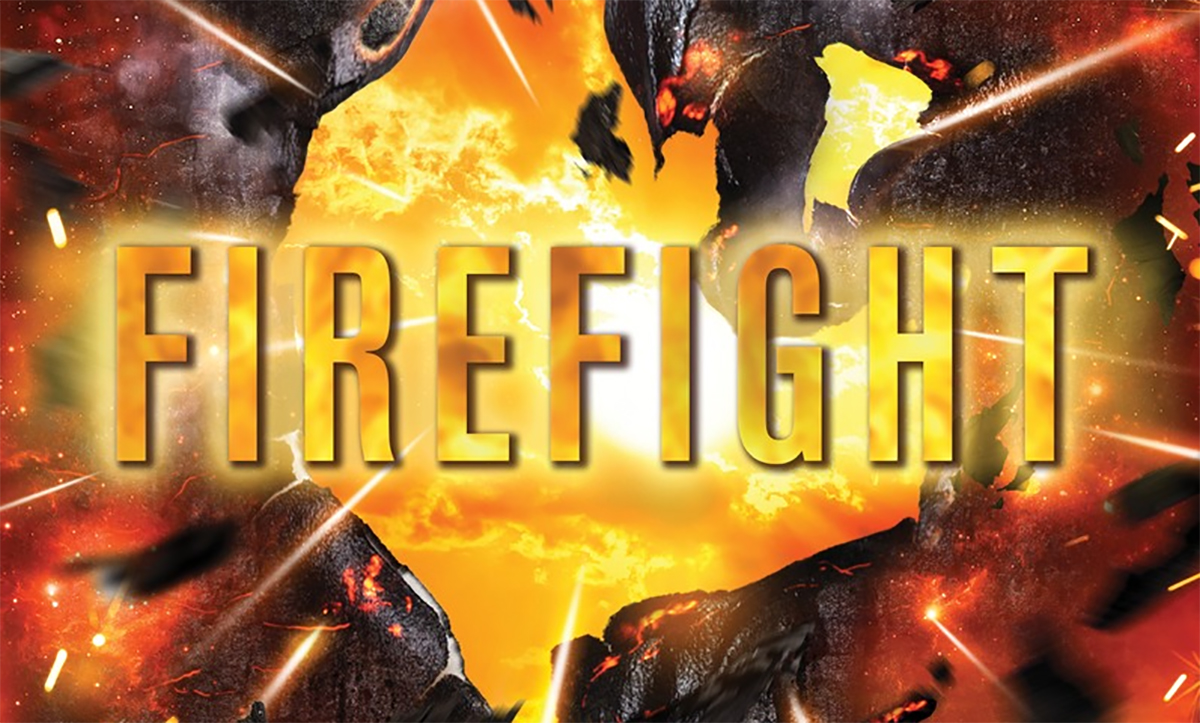 Get ready for an “epic” follow-up to ‘Steelheart’.

Brandon Sanderson is quickly becoming one of my favorite authors. While I have yet to read some of his more famous books (Mistborn, for example), I can say that his Reckoners series is fantastic, and Firefight plays a strong role in that.

They told David it was impossible–that even the Reckoners had never killed a High Epic. Yet, Steelheart–invincible, immortal, unconquerable–is dead. And he died by David’s hand.

Eliminating Steelheart was supposed to make life more simple. Instead, it only made David realize he has questions. Big ones. And there’s no one in Newcago who can give him the answers he needs.

Babylon Restored, the old borough of Manhattan, has possibilities, though. Ruled by the mysterious High Epic, Regalia, David is sure Babylon Restored will lead him to what he needs to find. And while entering another city oppressed by a High Epic despot is a gamble, David’s willing to risk it. Because killing Steelheart left a hole in David’s heart. A hole where his thirst for vengeance once lived. Somehow, he filled that hole with another Epic–Firefight. And he’s willing to go on a quest darker, and more dangerous even, than the fight against Steelheart to find her, and to get his answers.

Firefight is a worthy predecessor to Steelheart. Both are fast-paced and action packed.  His characters are witty and the story has just enough mystery to keep me reading.

It’s been said before that Brandon Sanderson’s forte is in world building. I don’t know if I have much more to add to that other than the fact that it’s true. I was actually very excited to see the story leave its previous setting and explore somewhere new. You get a better picture as to how the epics live and cooperate with each other. We got a good taste of this in Steelheart, but Firefight expands on this.

However, while Brandon Sanderson is a master at world building, I actually think the strongest points of this book are in its themes. One of my favorite things about this series is the moral exploration of power and weakness. Steelheart suggests that power corrupts a person. Firefight asks why and how. In fact, it even asks if it’s true. These questions were, for me, the driving force of the story.

Most authors agree that writing characters with black and white morals makes for a dull book. Yet even with this in mind, I feel like many of them fall short in their attempts to convey complex characters and themes. Brandon Sanderson does it well. The questions seem genuine because the characters’ motives are genuine.

If there is a pitfall to this book, it’s that it’s not as good as the first. Don’t get me wrong: it’s still great. And yes, it dives deeper into the world and themes. But as far as plot goes, it doesn’t work as well as the first did. I think my biggest complaint was the ending. It’s not what happens at the ending–rather, it’spacing. The climax seemed rushed and for that reason I didn’t get as big of a punch as I would have liked.

Regardless, this is such a good book. I certainly think this is one of the better YA series on the market right now.

One of the best out right now