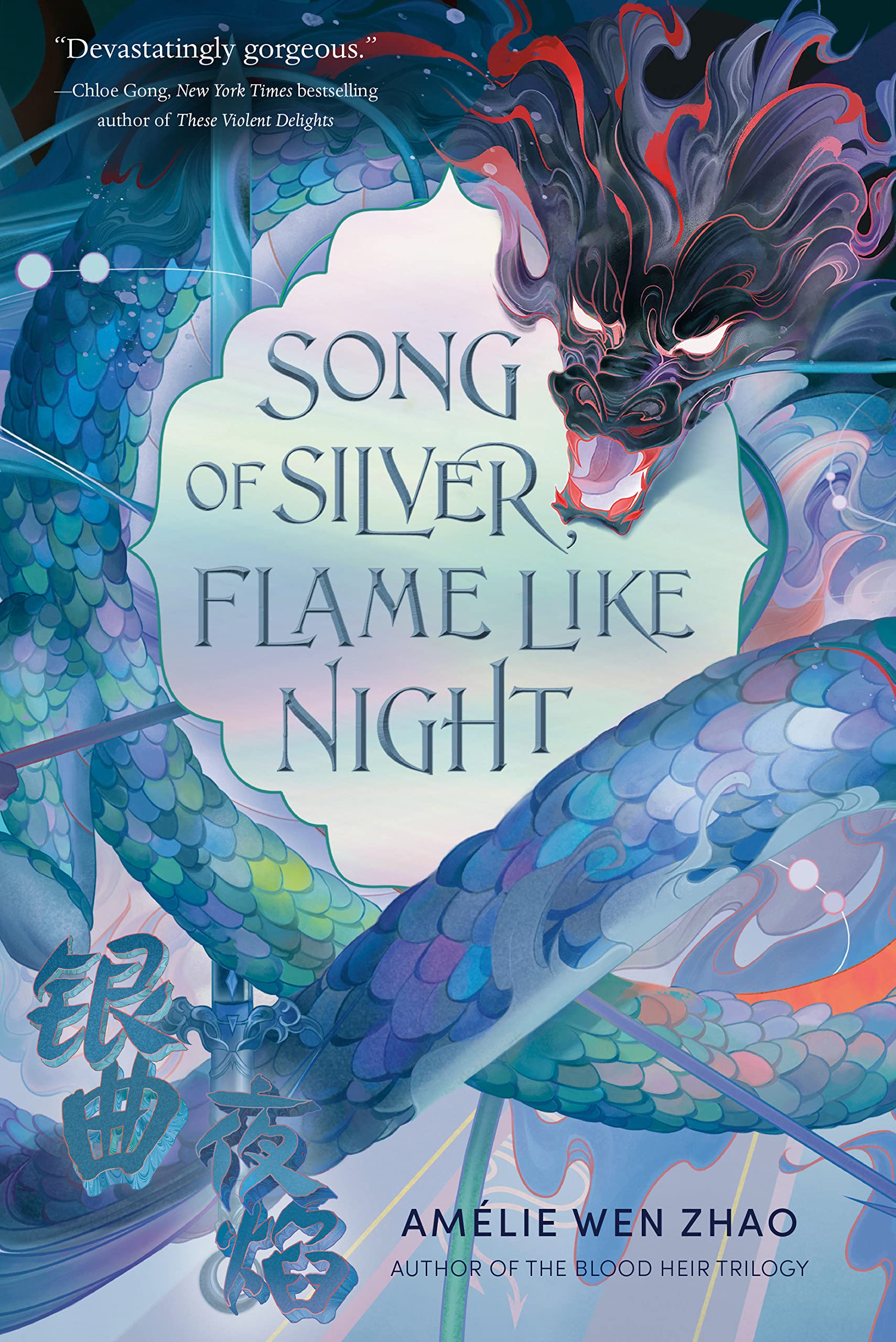 REVIEW: ‘Song of Silver, Flame Like Night’ by Amélie Wen Zhao is a stunning poetic addition to the fantasy genre

Amélie Wen Zhao returns with an epic new fantasy series sure to sweep readers off their feet!

This story is full of heart and a true love story enriched with Chinese culture. Readers will enjoy the strong characters and beautiful world!

In a fallen kingdom, one girl carries the key to discovering the secrets of her nation’s past—and unleashing the demons that sleep at its heart. An epic fantasy series inspired by the mythology and folklore of ancient China.

Once, Lan had a different name. Now she goes by the one the Elantian colonizers gave her when they invaded her kingdom, killed her mother, and outlawed her people’s magic. She spends her nights as a songgirl in Haak’gong, a city transformed by the conquerors, and her days scavenging for what she can find of the past. Anything to understand the strange mark burned into her arm by her mother in her last act before she died.

The mark is mysterious—an untranslatable Hin character—and no one but Lan can see it. Until the night a boy appears at her teahouse and saves her life.

Zen is a practitioner—one of the fabled magicians of the Last Kingdom. Their magic was rumored to have been drawn from the demons they communed with. Magic believed to be long lost. Now it must be hidden from the Elantians at all costs.

When Zen comes across Lan, he recognizes what she is: a practitioner with a powerful ability hidden in the mark on her arm. He’s never seen anything like it—but he knows that if there are answers, they lie deep in the pine forests and misty mountains of the Last Kingdom, with an order of practitioning masters planning to overthrow the Elantian regime.

Both Lan and Zen have secrets buried deep within—secrets they must hide from others, and secrets that they themselves have yet to discover. Fate has connected them, but their destiny remains unwritten. Both hold the power to liberate their land. And both hold the power to destroy the world.

Now the battle for the Last Kingdom begins.

There are two characters at the center of this story, Lan and Zen. They are polar opposites in many ways but share a lot of similarities as well. Neither of them has family left. Lan has been trying to survive as a small-town songgirl and Zen has been taken in by one of the last schools of practicioning. Given where they are in their lives it seems impossible that they would ever cross paths but fate has other plans for them.

When Zen finds himself in the same town as Lan it doesn’t take long for the two to meet. Lan knows there’s something different about Zen and Zen can instantly tell that Lan holds powerful magic within her. When they find themselves in a disturbing situation they must put their trust in each other despite having just met. This is when the real fun begins!

Lan and Zen are great characters! I enjoyed their chemistry. Lan is the “chosen one” who holds incredible power with no knowledge of how to wield it. Zen is a stoic and mysterious guy who is actually very genuine. They balance one another out and I think readers will enjoy them, even if they make bad decisions throughout the story. Plus, they have a fantastic slow-burn romance!

I instantly loved the world that Amélie Wen Zhao created in this series. Everything is set up perfectly in this first book. I have a good understanding of this world’s magic enough to fully enjoy the next installment and I hope that means there will be more action-packed scenes. There were a lot of fun moments in this book, but there were times when the pacing felt off. When something needed explanation it tended to take away from fully enjoying the action. Overall it didn’t stop me from enjoying the plot though.

The exploration of colonization and what one will do for power was interesting in this story. This is my first book that I’ve read by Amélie Wen Zhao and I found her writing poetic. Every word had a meaning and was perfectly placed in order for the reader to root for Lan and Zen as they try to take down the Elantian colonizers. I definitely think Song of Silver, Flame Like Night is going to be a huge hit!

One thing I wish there was more of was when Lan and Zen eventually end up at the school of practicioning where Zen resides. It was so interesting! There are more characters that get introduced and I enjoyed learning about the magic as Lan did. Of course just as Lan is finding a sense of home, her world gets turned upside down.

The last act of this book is amazing! I can’t say much without spoiling it but there are a lot of revelations and readers will find out the truth behind both Lan and Zen’s characters. There were a few shocking moments and some that were easy to predict. I still enjoyed all of it!

Overall, Song of Silver, Flame Like Night is an emotional adventure! If you’re in the mood for a new fantasy series with Chinese folklore then this book is perfect for you. It’ll be released at the beginning of next year on January 3. It’s perfect to start the new year with!

An emotional ride with fun magic