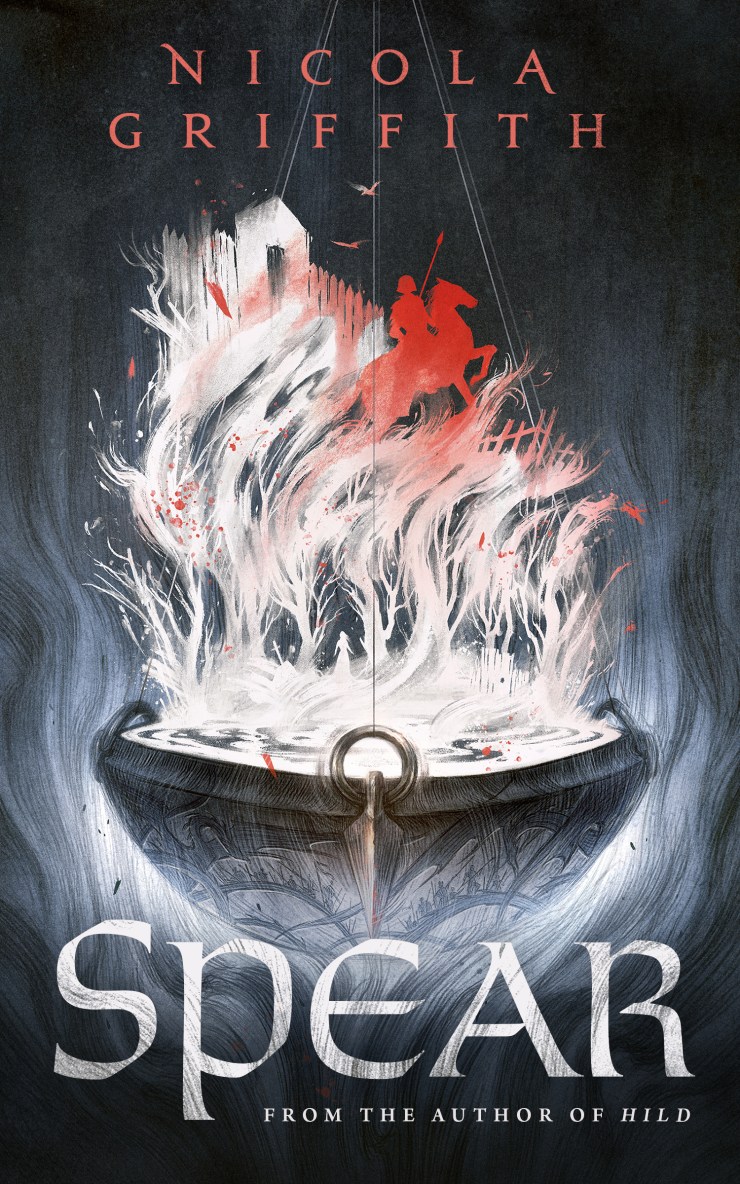 She grows up in the wild wood, in a cave with her mother, but visions of a faraway lake drift to her on the spring breeze, scented with promise. And when she hears a traveller speak of Artos, king of Caer Leon, she decides her future lies at his court. So, brimming with magic and eager to test her strength, she breaks her covenant with her mother and sets out on her bony gelding for Caer Leon.

With her stolen hunting spear and mended armour, she is an unlikely hero, not a chosen one, but one who forges her own bright path. Aflame with determination, she begins a journey of magic and mystery, love, lust and fights to death. On her adventures, she will steal the hearts of beautiful women, fight warriors and sorcerers, and make a place to call home.

Nicola Griffith makes excellent use of her intense knowledge of Arthurian myth and legend, and its origins, in Spear. She has taken on particular knight, Perceval, and traced his origins through ancient lore and come up with her own iteration of the character through Peretur, a brilliant, lesbian, determined woman.

I thoroughly enjoyed Griffith’s characterisation of Peretur, who takes to gender fluidity like a duck to water. She becomes he when the time is right, when she breaks into the world of men and knights, but returns to she when she meets beautiful women she simply cannot resist. I loved the blend of Peretur becoming involved in the world of men, and fitting in seamlessly, with her moments alone as a woman, or with other women. She is always, incredibly, herself. She speaks her mind and takes the routes she knows to be destined for her, and she doesn’t let a simple “no” get in the way.

Naturally, as a novella, Spear is very short. I found it ended rather abruptly — there hadn’t been any particular wind down of the story — but its length was (almost) perfect for the story it was telling. Griffith adds a fantastic level of detail in such a short time which perfectly rounds out the world and brings the setting, and other characters, to life. I always love novels that bring the old world to life, especially though myth and legend.

For history nerds like myself, Griffith has added a section at the end explaining her choices for the characters and the story, and discussing the origins of the characters throughout her reading. It’s a lovely added extra for anyone with even a tiny interest in the medieval past.

Overall, Spear is a great, short read that brings a well-researched, beautifully subversive take on traditional legend to the table. The writing matches the legendary tone, while the LGBTQ+ characters give us something to think about when rereading our own histories.

This was simply a good read. The perfect length to dip your toe into Arthurian legend if you are new to the topic, and different enough to the tradition for those more familiar to have something to chew on.