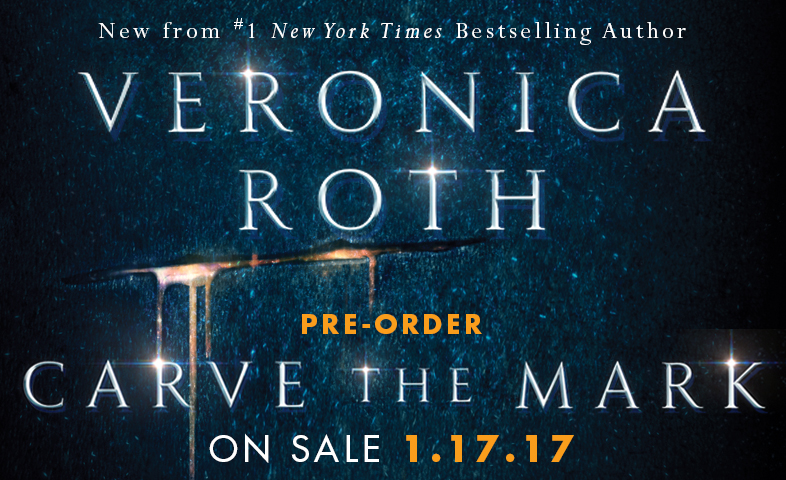 New trailer for a new book. That is what fans and readers of Veronica Roth got this week. A trailer promoting her new book, the first in a two part series, was released to the world. Come and check it out. Tell us what you think!

Calling all fans of Veronica Roth!

Yesterday afternoon, Veronica Roth took to her tumblr, Instagram and Twitter accounts to share the trailer for her new book, Carve The Mark (you can read up on what we know so far here and here.)

The trailer gives us hints that it’s possible that in the world of this new series, certain people have special abilities and whether those abilites are used for good or evil is something we, the audience, will have to find out when we read the book. The color scheme throughout the 1 minute trailer alternates between blue and red (a possible foreshadowing to a fight between good and evil, fire and ice/water or maybe it foreshadows an internal conflict with one of the main characters.)

The trailer is narrated by a female voice, presumably Cyra, who is one of the two leading characters in the duology. in her narration, she talks about a current that runs through everyone which gives them their gifts, but while some abilities benefit the beholder, others have their abilities exploited by others. “The current gives him his armor, but it’s my curse,” is the last sentence spoken in the trailer which, sums up Cyra’s dilemma with her gift being exploited by her brother who is the brutal tyrant of the Shotet people and uses her gift to torture his enemies.

Take a look at the trailer below and see for yourself.

And ICYMI, author Veronica Roth has been posting quotes of Carve The Mark on her Instagram account every Friday (almost). So far she has posted 6 quotes on her account, check them out below.

The first lines of #CarvetheMark: “Hushflowers always bloomed when the night was longest. The whole city celebrated the day the bundle of petals peeled apart into rich red– partly because hushflowers were their nation’s lifeblood and partly, Akos thought, to keep them all from going crazy in the cold.”

“I had all the subtlety of a fist to the face.” – Cyra, Carve the Mark

“We knew how to hold the beauty of old things against the beauty of the new, losing nothing from either.” – Cyra, Carve the Mark (re: Shotet culture.)

“Soft hearts make the universe worth living in.” – Carve the Mark

“You’re determined to deprive me of fun.” “That’s because apparently, your version of ‘fun’ is making me believe I’m in mortal peril.” — Cyra and Akos, #CarvetheMark

“That is the distinct feature of all my children. They are persistent. To the point of delusion, some might say.” – Sifa, Akos’s mother, #CarvetheMark If there’s a quote that defines Akos to me, this might just be it.

Do these quotes along with the trailer have you excited for the release of Carve The Mark? Let us know what you think by leaving us a comment on our Facebook or Twitter page!