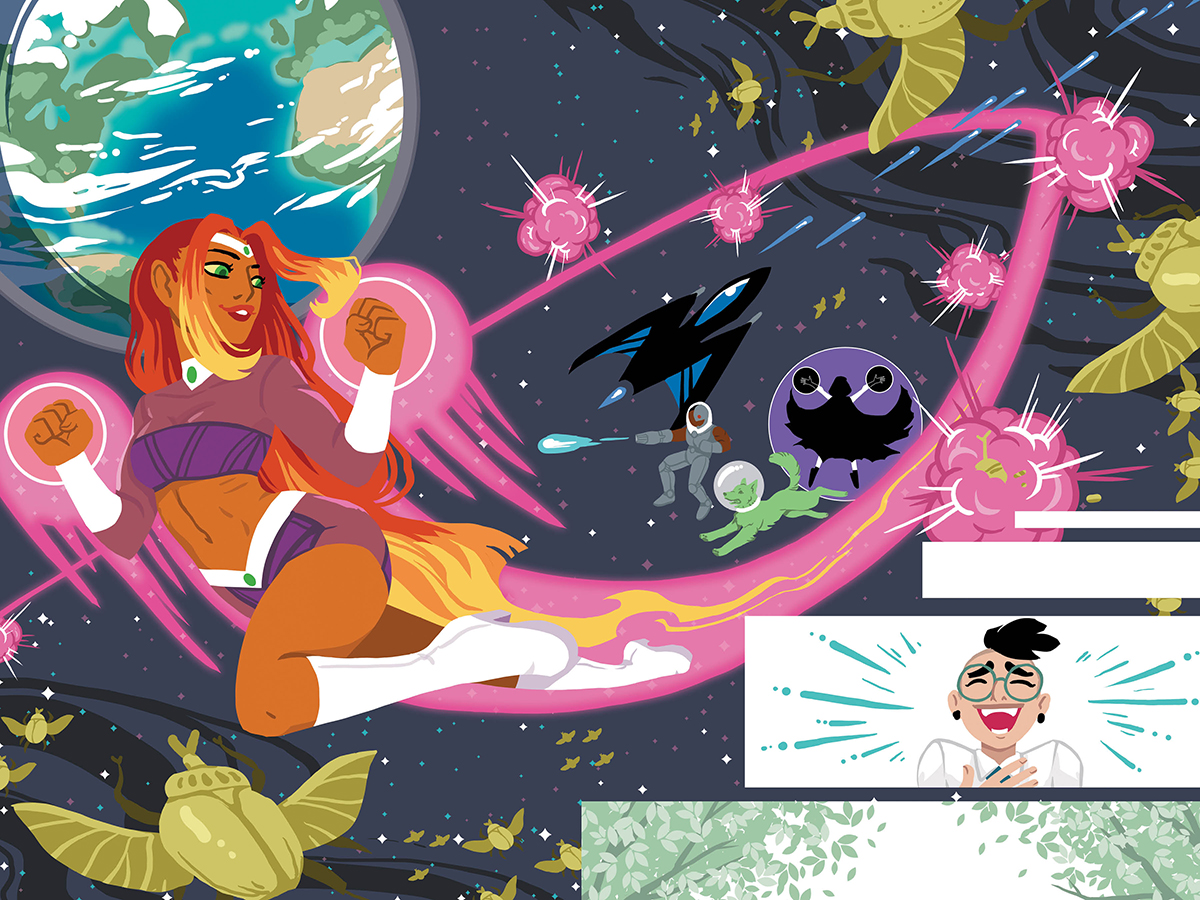 Artwork from ‘I Am Not Starfire’ by Mariko Tamaki. Illustrated by Yoshi Yoshitani. (DC)

DC’s newly announced graphic novel is a mother-daughter story with an LGBTQ+ romance.

What would it be like to have a superhero for a mom? DC’s upcoming YA graphic novel from author Mariko Tamaki and artist Yoshi Yoshitani will explore that question in I Am Not Starfire.

DC unveiled the upcoming release earlier this week, which will follow the story of Mandy, the daughter of Teen Titan’s Starfire.

“I feel so lucky to be able to work on these books for DC, to write superhero comics and work with incredible talents like Yoshi Yoshitani,” Tamaki told DC. “I wanted to work on a book about finding power in what you are (versus focusing on what you aren’t). I think Starfire is such an amazing character, so larger than life and just overall fabulous. She’s really a joy to write. I’m so excited for people to read this new comic and meet her daughter Mandy.”

Unfortunately, fans will have to wait until August of next year to get the book in their hands, but DC has shared a sneak peek at some of the stellar and vibrant artwork that will be featured in the novel.

No doubt, it’s easy to see the divide between Starfire and Mandy in these panels.

Contributing artistically to I Am Not Starfire was a dream come true, according to Yoshitani.

“Partnering with Mariko Tamaki to create a world filled with familiar characters from my childhood, brand-new faces, and flashy superpowers, underpinned with feelings of teenage angst all while trying to do justice to longtime DC readers and those picking up comics for the first time has been a fulfilling whirlwind,” Yoshitani said in a press release.

This is the second graphic novel Yoshitani has illustrated for DC, the first being Zatanna and the House of Secrets by Mathew Cody.

From New York Times bestselling author Mariko Tamaki (Laura Dean Keeps Breaking Up with Me, Harley Quinn: Breaking Glass) and artist Yoshi Yoshitani (Zatanna and the House of Secrets) comes a story about Mandy, the daughter of super-famous superhero Starfire.

Seventeen-year-old Mandy, daughter of Starfire, is NOT like her mother. Starfire is gorgeous, tall, sparkly, and a hero. Mandy is NOT a sparkly superhero. Mandy has no powers, is a kid who dyes her hair black and hates everyone but her best friend Lincoln. To Starfire, who is from another planet, Mandy seems like an alien, like some distant angry light years away moon.

And it’s possible Mandy is even more distant lately, ever since she walked out on her S.A.T.s. Which, yeah, her mom doesn’t know.

Everyone thinks Mandy needs to go to college and become whoever you become at college, but Mandy has other plans. Mandy’s big plan is that she’s going to move to France and…do whatever people do in France. But then everything changes when she gets partnered with Claire for a school project. Mandy likes Claire (even if she denies it, heartily and intensely). A lot.

When someone from Starfire’s past arrives, Mandy must make a choice: give up before the battle has even begun, or step into the unknown and risk everything to save her mom. I Am Not Starfire is a story about teenagers and/as aliens; about knowing where you come from and where you are going; and about mothers.